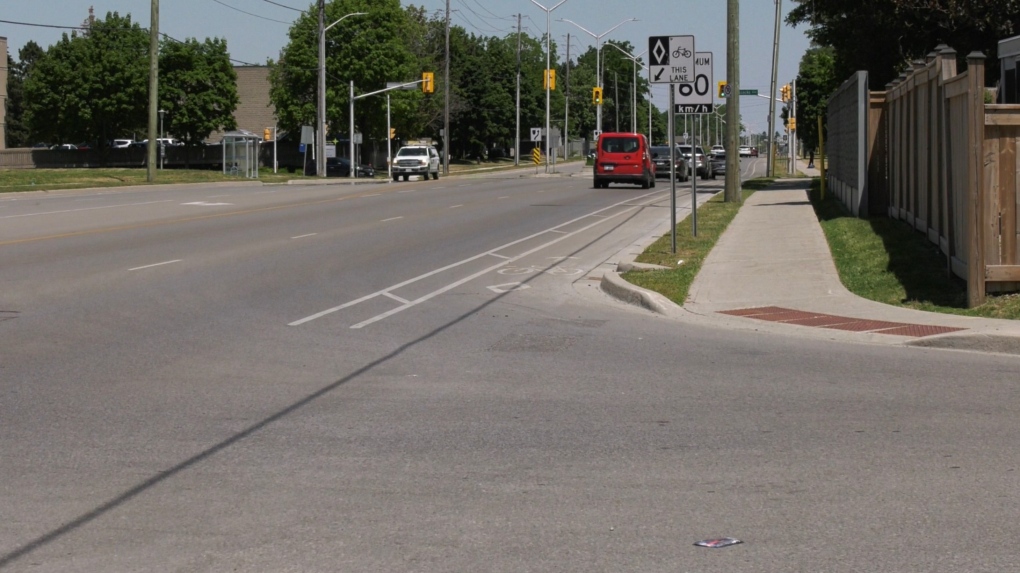 A bike lane running along Fanshawe Park Road East cross Glengarry Avenue. A female cyclist became trapped under a vehicle after being struck at this location on June 28, 2022. (Gerry Dewan/CTV London)

Witnesses said a man used a jack to free a female cyclist trapped underneath a vehicle at the corner of Glengarry Avenue and Fanshawe Park Road East early Tuesday afternoon.

"Half of her body was underneath the vehicle," said Lisa Morcos, who lives at the corner and was one of the first on the scene. "It was pretty bad. She was in pretty bad shape."

Morcos said she was prepared to use her own jack but her mother was uncertain if that was the best idea, and told CTV News, "My mom didn't want me to touch anything just in case it hurt the lady even more."

The man then arrived on scene with his own jack, lifted the vehicle and others freed the victim.

Another witness who didn't want to be identified said the woman was riding with her daughter, heading west on Fanshawe Park Road in the bike lane that runs along the south side of the road. The vehicle was heading north on Glengarry Avenue and was making a right hand turn onto Fanshawe Park Road when the cyclist was struck.

Morcos said gouges on the road that travel through the bike lane were caused by the woman's bike being dragged.

Morcos said the victim's daughter told those gathered that her mother is 61-years-old and had recently undergone hip surgery.

The woman was taken to hospital with a police escort.

Witnesses said she suffered primarily lower body injuries and London police said the injuries are not believed to be serious.

Police have not yet released any information about what, if any, charges will be laid.

Newly disclosed documents show federal intelligence officials warned decision-makers that the police dispersal of 'Freedom Convoy' protesters in Ottawa last winter could prompt an 'opportunistic attack' against a politician or symbol of government.

A 12-year-old player in the Little League World Series is in critical condition after falling from a bunk bed at the players' dormitory in Williamsport, Pennsylvania, his team tells CNN.

Increased loneliness, isolation a side effect of inflation for Canadian seniors

Canadian seniors are being forced to make tough choices, cutting out frills and nice-to-haves in the face of near 40-year-high inflation rates. But older adults also face a unique, less-talked-about challenge — the increased social isolation that experts say often occurs as a result of high inflation.

More than half of Canadians say the pandemic negatively impacted their children: report

A new report has found that more than half of Canadian parents report 'negative impacts' on their children after two years of living through the COVID-19 pandemic.

Having seen eight coaches come and go in less than 10 years, Manchester United fans know their false dawns. Wednesday shed a different light on strife at the giant football club: Elon Musk said he was buying it -- and then said it was all a joke.