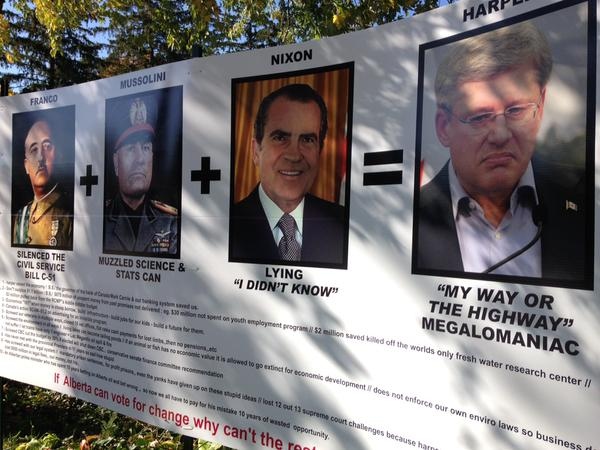 There's just one week to go before the federal election and the race in London's most hotly contested riding has taken a bizarre turn.

Residents in London-West are upset over one home-owner's anti-Conservative signs.

They say the signs incite hate but the home-owner argues it's free speech.

"I really think it's disgusting that we can allow this to happen in London ontario. I really don't think there's a need for it. I think the man is out of touch with reality," says neighbour Jim Allen.

But Robert Tilden is making no apologies for his anti-Harper display on his lawn.

"I recognize a fascist when I see one and that's what Harper's been doing to the country. He's been destroying it bit by bit under his image," says Tilden.

"The signs are an expression of our ability to express our views and opinions but when you're vandalizing a sign I think it's taking it too far," says neighbour Chris Zouzal.

According to Elections Canada, defacing a sign is an offense under the Criminal Code.

"Ask me if I give a shit. To put it boldly, I don't give a damn. Mr. Holder had somebody put that on my lawn," says Tilden.

He says the sign simply showed up one night on his lawn.

But candidate Ed Holder refutes that.

Holder says he'll ignore the exhibit and carry on.

Tilden says he's had the signs up for more than three weeks now and he says up until now no one has told him to take them down or even expressed concern, at least to his face.

"Tough shit. Get used to it. If somebody doesn't protest we're going to have another dictator (Harper) for another four years," says Tilden.

"If he doesn't like Harper then that's his business. He doesn't have to put this demonstration on that he thinks he's going to impress everybody. Because he's not impressing anybody," says Allen.