LONDON, ONT. -- A food drive that doesn’t ask for food.

It may seem a tad absurd at first, but in a year that can be described as “unconventional” at best- that is the new reality, the COVID-19 reality.

“It’s obviously the biggest change we’ve ever had to adapt to,” said campaign chair Wayne Dunn.

The 21st edition of the Business Cares Food Drive was launched Tuesday at the RBC Centre, but with a couple of major changes. First, the campaign is asking for financial donations, while minimizing its food collection. Secondly, it has no specific goal.

Campaign chair Wayne Dunn said this year all he’s asking is that organizations do what they can. 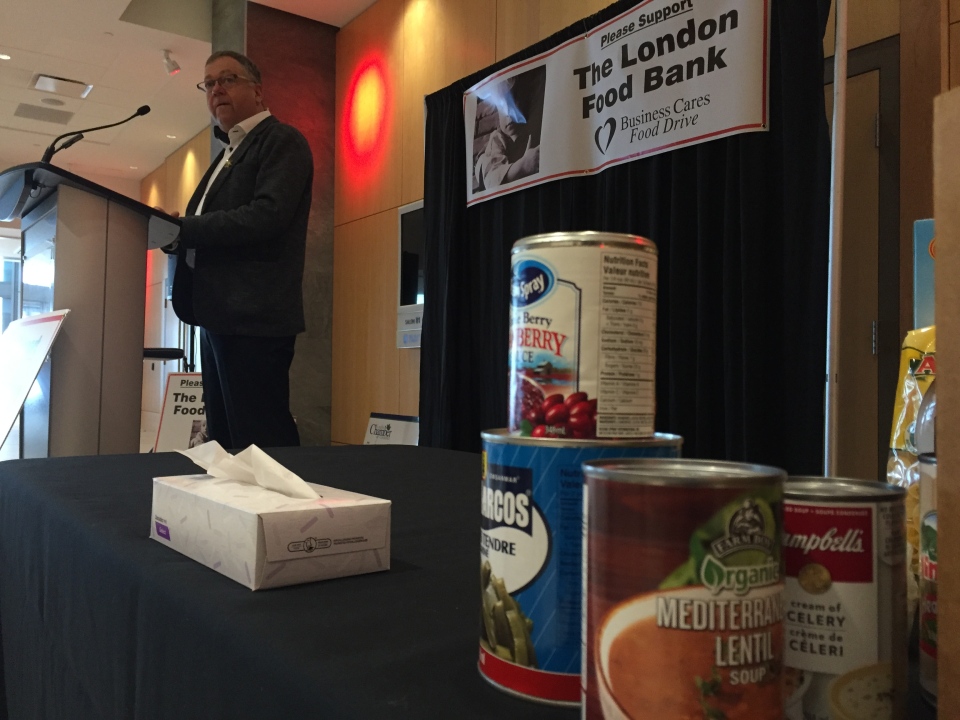 “We’ve asked people to donate, but only if they can. Some businesses have done very well through the pandemic. Others, as we know, restaurant people and that, there’s not a chance we’d be reaching out to them because they need help themselves.”

Business Cares is a way for London companies and organizations to help the needy out during the holiday season, by holding in-house food drives with staff donations.

“The money side of it, which is so much easier for people- rather than going out in COVID or whatever,” he said. “People just find it easier, and we as a food bank can do a lot easier job finding dairy products and fresh produce, so it’s good.”

In spite of challenges posed by the pandemic, some organizations have already stepped up.

The London Chamber of Commerce presented the campaign with a cheque for $48,321 in October, but it didn’t come about from any conventional fund-raising.

Manager Gerry Macartney explained to the socially distanced group at Tuesday's launch that it came as a result of the cancellation of the Business Achievement Awards in March, as the worldwide pandemic was declared.

He said that rather than asking for their money back, hundreds of ticket-holders opted to allow the money to be given to the campaign.

“The 800 people who bought tickets and said ‘take my $63 and give it to Business Cares Food Drive so they can give it to the food bank. So the real heroes are those folks right there.”

According to Business Cares, the London Food Bank provides emergency food items for over 7,000 individuals monthly -- 39 per cent of whom are youth under the age of 17. The number of seniors also continues to increase.

The Food Bank also provides assistance to more than 28 other programs and social agencies.

For those who do wish to donate food there is one opportunity this weekend.

“Saturday and Sunday is grocery weekend at 25 London Stores,” said Dunn. He added that all other events have been cancelled, and from that point on the campaign goes virtual.

The Business Cares Food Drive wraps up Dec. 22, the Day of Giving. You can donate here.