“I have a broken collarbone and some road rash and bruising on my shoulder, hip and knee,” says Van Puyenbroeck.

He was cycling with a group of members from the London Cycling Club on White Oak Road Sunday morning when he and a fellow rider were involved in a crash with a truck.

“We hear a car horn honk behind us,” says Van Puyenbroeck.

“We're driving as we normally do, we keep nice and tight to the right and trying to keep lots of space,” he tells CTV News London. “Here comes the truck coming up alongside me at a curve in the road, and I'm thinking already I'm a little concerned because I know he can't see or that person can't see what's coming. And then the next thing you know, the vehicle's just driving right into us. Swerved deliberately into us.”

A group of cyclists trailing behind grabbed a cellphone and took a photo of the truck involved in the alleged hit-and-run. 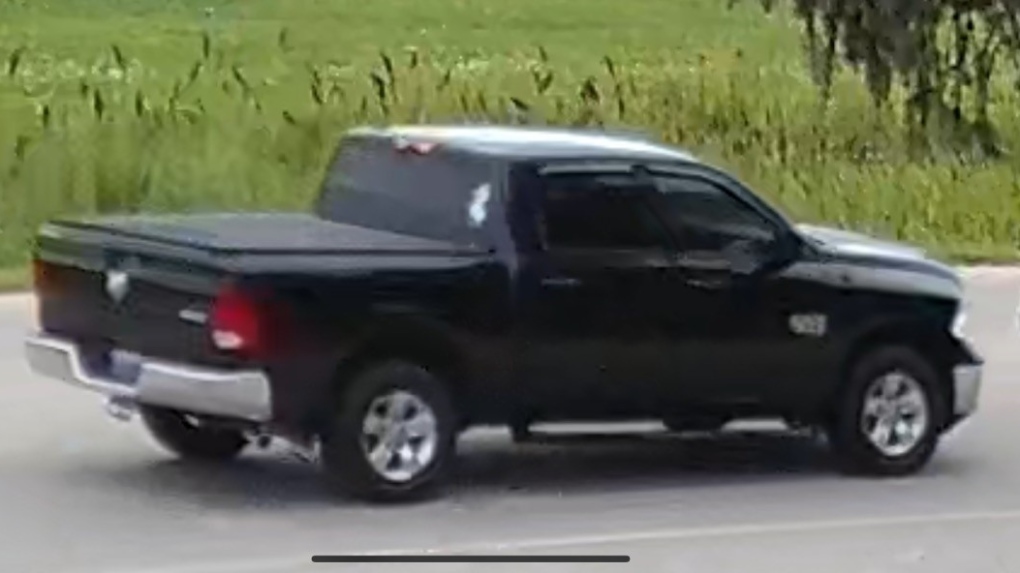 London police are searching for the driver of this black pickup truck that is wanted in connection with an alleged hit and run on August 14, 2022 in London, Ont. (Source: London Police Service)
London police say the truck in question is described as a black Dodge Ram with a chrome bumper, dark tinted windows, white decals on the rear window, possibly of the character Olaf from the Disney film Frozen, plastic window rain guards, tonneau cover, and a possible toolbox in the truck bed. The truck may have damage to the rear passenger side panel.

Van Puyenbroeck says his group weren’t the only ones who had a run-in with the truck. He claims the pack behind them also had a near-miss.

“He kind of swerved at them and tried to intimidate them on the road,” says Van Puyenbroeck. “They then came upon us and did the same thing, but he literally ran into us.”

He says his group is often “buzzed” by vehicles on their weekly rides, but this time it resulted in a crash.

“We both went to emerge [emergency],” says Van Puyenbroeck.

Van Puyenbroeck adds, “He's [the other cyclist who was struck] actually...very fortunate that he had a helmet because he landed much harder on his head and we both had pretty hard crashes. I just landed on my shoulder and broke my collarbone but he's got some more kind of a cracked cheekbone.”

London police are asking anyone who may have been travelling in the area who may have dashcam video to contact them at (519) 661-5670.

What each province, territory is doing on National Day for Truth and Reconciliation

Friday is the second annual National Day for Truth and Reconciliation, also known as Orange Shirt Day. The federal government made Sept. 30 a statutory holiday for its workers and federally regulated workplaces last year.

On this National Day of Truth and Reconciliation, a recent investigation into the death of a 32-year-old Indigenous man is a stark reminder of the ongoing struggle for justice that continues to elude the Ojibways of Onigaming First Nations.

The national chief of the Assembly of First Nations says today's National Day of Truth and Reconciliation is about the survivors of Canada's residential schools and the children who died in them and never made it home.

Indigenous leaders in Quebec are lamenting the fact that priorities for their communities have been largely ignored during the provincial election campaign.

A revived Hurricane Ian set its sights on South Carolina's coast Friday and the historic city of Charleston, with forecasters predicting a storm surge and floods after the megastorm caused catastrophic damage in Florida and left people trapped in their homes.

Russian President Vladimir Putin signed treaties Friday to annex occupied areas of Ukraine and said he would use 'all available means' to protect the territory that Ukrainian and Western officials said Russia was claiming illegitimately and in violation of international law.

'Justinflation' can't be said in the House of Commons, but MPs are trying anyway

The Conservatives' cheeky term for inflation under the Liberals has got some MPs into trouble in the House of Commons, where saying 'Justinflation' has been deemed verboten.

W5 | Invasive pigs, liberal tears and the appreciation of nature

Saturday at 7 p.m.: CTV W5 investigates the war with wild pigs, a destructive invasive species that has spread throughout the world and now threatens to move into some Canadian cities.