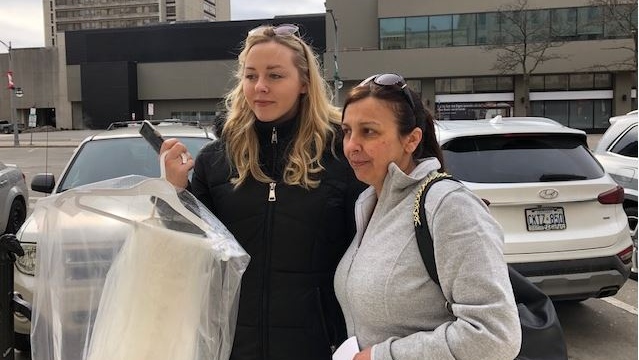 Andrea Chelchowski and her mother-in-law Paula Domingues after receiving a wedding veil in downtown London Ont. on March 14, 2020. (Jordyn Read/CTV)

LONDON, ONT. -- It's a silver lining in what has been a stressful number of weeks for several local brides-to-be.

Carly Green, store manager at Nicholas & Elizabeth Bridal, had originally blamed the closure on a leak on March 3, but after further investigation CTV News learned it’s an issue of unpaid rent.

On Saturday, Green and building owner Ian Johnstone were inside Nicholas & Elizabeth Bridal, giving some of the brides their wedding dresses.

Bride-to-be Andrea Chelchowski and her mother-in-law Paula Domingues were leaving the store Saturday with just a veil and a belt.

“Carly told me she saw my wedding dress with her own eyes, then admitted today that was a lie,” says Chelchowski.

She says she has no idea what she will be walking down the aisle in on her wedding day in May.

“I don’t know how Carly sleeps at night, “ Domingues says.

Domingues also adds that the landlord, Johnstone, has been very helpful considering the situation.

Purdy says she’s happy this is all over for her, but "I’m concerned for other brides.”