"We have spent whole year trying to stay alive then this happens," says Lyndon Horsfall, co-owner of the shop. 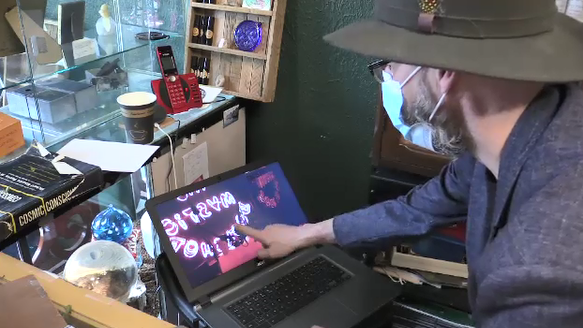 They aren't the only ones feeling the effects of property crime in the area.

"Pretty much every shop along Dundas has been hit so we knew our time was coming," says Mary Beechie, who owns the shop at the corner of Dundas and Adelaide Streets with her partner.

"Our next door neighbours Wisdom Tea have been hit three times this last year."

All of these incidents are happening directly across from London Police Headquarters.

With construction closing Dundas St. between Adelaide and English, businesses are feeling vulnerable.

"It felt really difficult leaving the shop alone so I slept here last night," says Horsfall, who had a baseball bat by his side.

"With only a piece of plywood between us and the street I kept an eye on the store and every noise and person walking by woke me up and put me on alert."

The shop owners have been asking the city and police for help.

"It's hard to know what to do beyond what has already been done to reduce this kind of crime," says Helmer, who also is a member of the London Police Services Board.

"I have talked to the police chief and the deputy chiefs about this problem. I know the police have changed a number of things including changing the schedule for foot patrol as they are trying to reduce this kind of crime but it is still happening. They are trying their best to police the area and they are as frustrated as anybody".

When sleeping in the store overnight, Horsfall says he didn't see any police officers on patrol. He added the BIA was going to provide security to the area, but he also has seen no evidence of that happening.

"We'd call it 'Walking with Buddies' and ideally if people were interested, we could have a rotating schedule," says Beechie.

"We have to do something. There are enough home owners and business owners who are angry enough to become a presence again."

However Helmer doesn't support that plan.

"It’s one thing to look out for property, and make sure it's safe and secure," says Helmer.

"It's another thing to take on job of police because things can escalate very quickly. I understand that people are frustrated, despite many things happening in the core area action plan, changing foot patrol schedule, and increased resources in policing that things keep happening, but i don't think that course of action is a good one".

However Horsfall feels if things don't change soon, the community patrol may be their next course of action.

"The city is not protecting us, so someone has to," says Horsfall.

They got to us. We’re devastated, and unfortunately will have to be closed for a bit. We’ll let you know when we’re back up and running. We’re just gonna go cry now. :(