A 10-year-old St. Thomas, Ont. boy is telling a fishing story unlike any other.

On Sunday, Brandon Bastien was magnet fishing with his grandfather, Steve Posthumus, off the pier at Port Bruce, Ont. when he pulled up a unique, but possibly explosive, find.

Bastien then called his grandfather over and told him to bring his phone to take a picture.

“I actually thought it was a fuselage of a toy airplane and then I saw a rocket end and I knew it was something different.”

It wasn’t long before Bastien says those nearby took notice.

“And then the other people were magnet fishing and they said it was a mortar shell bomb, and I got all excited because it was from 1954.”

Posthumus took a closer look and felt the shell wasn’t likely live. But, with the rocket still attached, he and some others determined it was best to put the shell safely aside and notify police.

“My grandpa said, we have a bomb with us and we just caught it out of the water. But because they were on boat duty, they weren’t allowed to get onto land.”

Police cruisers began to arrive. The first officer determined the public needed to move further back.

“The first officer actually moved people back probably 50 plus feet (18 metres). And it just grew from there and they shut a whole bunch of the pier down. They used a whole lot of yellow caution tape.” 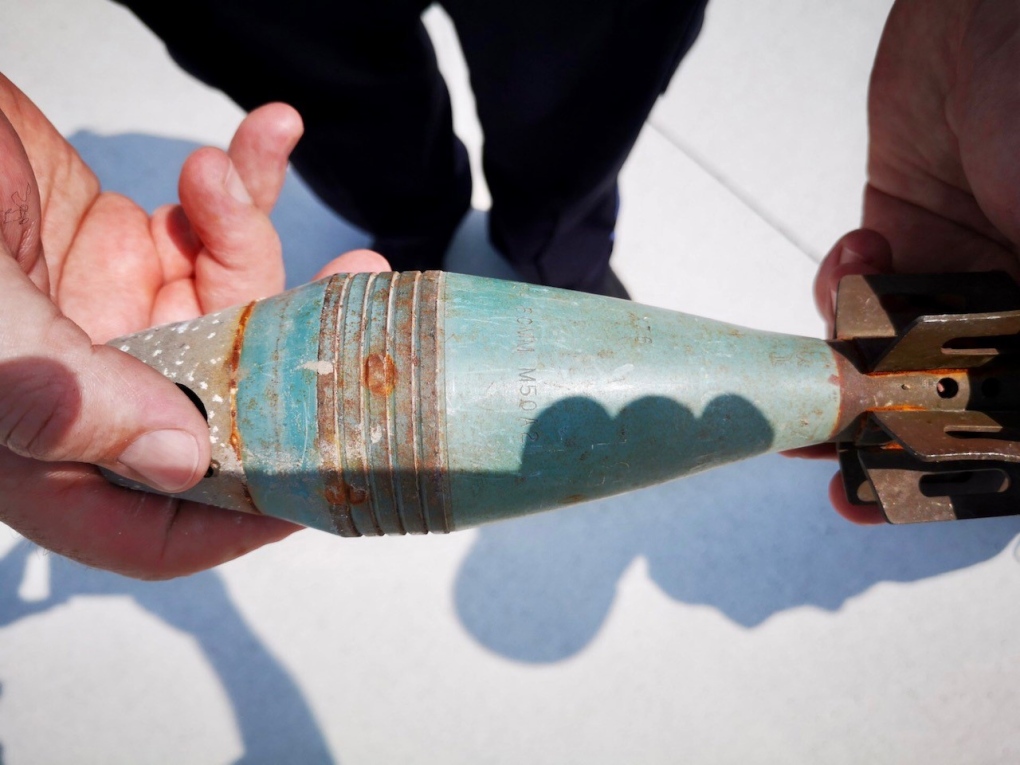 Eventually, the area was secured and police took the ordnance safely away.

Monday, OPP spokesperson Derek Rogers told CTV News London the shell would be picked up at OPP Headquarters by representatives from the Department of National Defence.

At this point, the shell is considered to be inactive and “not a threat,” Rogers confirms.

As a result, Posthumus is hopeful his grandson will get it back to remember his unique find on his first day of magnet fishing.

He says in his many days magnet fishing at the pier, his most interesting find is an iron leg from a century-old claw foot bathtub.

With a play on words, Posthumus acknowledges his grandson now has him beat.

“It can be a real blast,” he chuckled with a reporter in jest. “But I am glad it all turned out safe.”

As for young Bastien, he hopes he keeps finding unique things. But he agrees some valuable “treasure” would beat another story about the one that nearly “blew” away.

Candidates are making their final appeals to voters today ahead of tomorrow's federal election.

Female employees in the Kabul city government have been told to stay home, with work only allowed for those who cannot be replaced by men, the interim mayor of Afghanistan's capital said Sunday, detailing the latest restrictions on women by the new Taliban rulers.