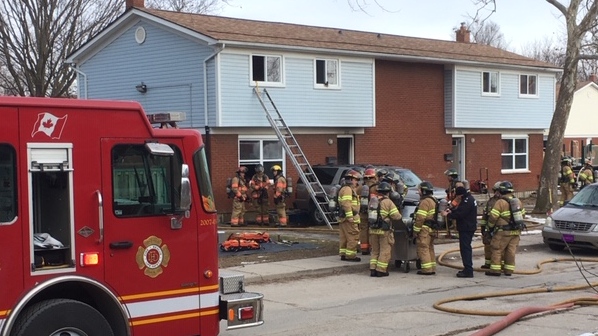 LONDON, ONT -- Firefighters were able to save one cat from a fire at a townhouse on Boullee Street; however a second cat did not make it.

Fire crews arrived on scene to 312 Boullee Street around 9:35 a.m. and immediately found smoke coming from one of the units.

Two cats were reported inside the unit and firefighters were able to locate both of them. One of the cats was able to resuscitated but the other cat unfortunately passed away.

The fire was contained to one section of the townhouse and the family living there was able to escape safely.

Two firefighters were taken to hospital to be assessed for "minor strain injuries," according to the London Fire Department.

Fire crews has extinguished the fire, primary and secondary searches are all clear. Crews are ventilating and are checking neighbouring house. #LdnOnt pic.twitter.com/UMopIaqtKZ

The cause of the fire is unknown but the investigation is in the early stages.

The Red Cross has been brought in to assist displaced residents.