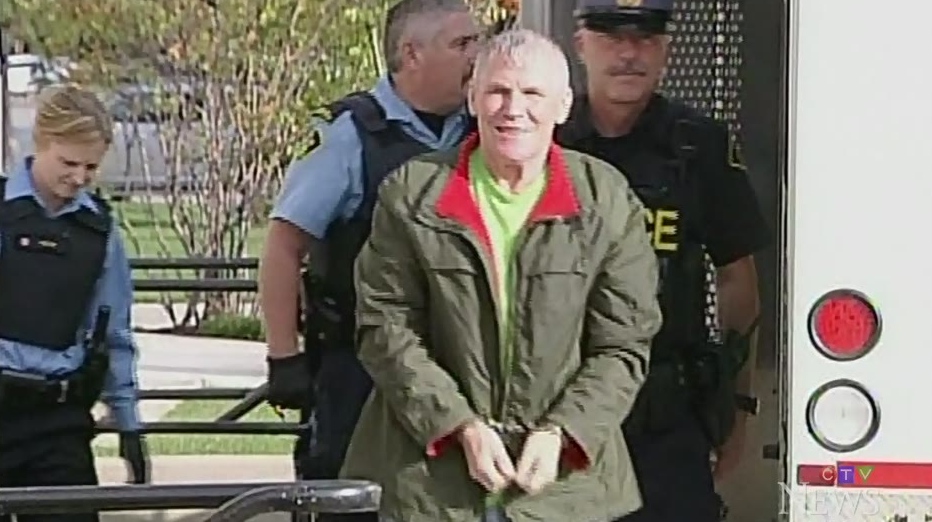 Boris Panovski, accused in the shooting death of Don Frigo and of injuring his wife, arrives at the courthouse in Goderich, Ont. on Wednesday, Oct. 7, 2015. (Scott Miller / CTV London)

Boris Panovski has been convicted of murder in connection with a shooting death at a midwestern Ontario wildlife area.

Jurors deliberated for about five hours Thursday and a short period of time Friday before reaching a unanimous verdict of first-degree murder.

Panovski was also found guilty of aggravated assault in connection with the Sept. 13, 2014 shooting at the Hullett Wildlife Conservation Area near Clinton.

Don Frigo, a construction executive from the Greater Toronto Area, was killed. Eva Frigo, his wife, was injured.

Panovski became the subject of a Canada-wide warrant, and was arrested one week after the murder while arriving back in the country from a trip to Macedonia.

Over the course of a nearly eight-week trial, jurors heard that Panovski and Frigo had a close relationship that spurred from their mutual interest in hunting dogs. At one point, Panovski lived on Frigo’s farm.

Testimony further revealed that Panovski had fallen into financial difficulty after his WSIB payments ended when he turned 65.

The trip to Macedonia also loomed large during the trial, with the Crown questioning why Panovski would make a spur-of-the-moment decision to visit relatives he had not been in contact with for several years. Panovski said he took the trip because he was depressed about his marriage falling apart.

Panovski’s lawyer had argued that there was no proof his client was behind the shooter, noting that Eva Frigo was unable to identify him as the gunman and that Panovski’s grandson said the car believed to belong to the gunman did not belong to his grandfather.

The grandson also testified that Panovski had asked him for a gun “because he wanted to kill someone.”

Jurors broke their deliberations Friday morning to ask the judge about the difference between attempted murder – the offence he had been accused of for shooting Eva Frigo – and aggravated assault. The judge replied that the difference came down to whether jurors believed Panovski meant to harm Eva Frigo in general or to kill her specifically.

After returning to their deliberations following that question, it took the six-man, six-woman jury about 40 minutes to come up with their verdict.

First-degree murder carries an automatic penalty of life imprisonment with no chance to apply for parole for 25 years. Panovski’s sentencing hearing is expected to take place within the next two weeks.