Bogdanovich and MacGregor get life sentences for Sarnia teacher's murder

Michael MacGregor and Tanya Bogdanovich have been sent to prison with life sentences and no chance of parole for 25 years in the murder of Noelle Paquette.

MacGregor, 22, faced Paquette's family in the St. Thomas, Ont., courtroom on Thursday as he and his co-accused awaited sentencing.

"I want to say sorry, I know I can't change or take back what I've done no matter how much I wish I could," he said.

"What I did was terrible and because of it Noelle is gone, when instead she should still be with you," he added. "I'm not asking for your forgiveness - I don't deserve it and could never hope for it."

MacGregor also apologized to his own family, saying he had let them down and planned to seek psychiatric help.

For her part Bogdanovich said, "I stand before the court as someone who's caused immeasurable pain...This horrible act, one night forever changed the course of many lives and it can't be undone."

The couple pleaded guilty in December to first-degree murder in the gruesome killing of Paquette, a stranger they abducted on a road as she was walking home from a New Year's Eve party in Sarnia, Ont.

An agreed statement of fact read in court Wednesday said Paquette, who is from Sarnia, was "merely in the wrong place at the wrong time," and though she tried to fight off her attackers, she was overwhelmed by their "violent sexually motivated desires."

The pair chronicled their sexual desires and activities in pictures, videos and writings and by September of that year, were discussing their fantasy of abducting and raping a teenage girl. The statement said the couple's plan fell through when their chosen target was unavailable and they decided to pick up a "random" instead.

Paquette had gone to a party with her boyfriend but stormed out after they got into a fight, court heard. She tried unsuccessfully to get a taxi and decided to walk home.

She last texted her boyfriend around 2:30 a.m., just moments before she was abducted, the statement said.

Her body was found in a woodlot on Jan. 2, 2013, less than 24 hours after she was reported missing by concerned family and friends.

An autopsy found Paquette died from the dozens of stabbing and incised wounds that perforated her heart, lungs, liver and other organs and slashed her throat.

"It was determined that she was still alive when she sustained these injuries but would have succumbed rapidly due to their severity," court heard.

Police found Bogdanovich and MacGregor by the side of the road on New Year's Day after their car broke down not far from the site of the killing.

At the time, Paquette had not been reported missing and there was no reason to suspect the couple, court heard, but suspicion quickly turned to the pair once her body was found and the pair was arrested a day later.

The offence carries an automatic life sentence with no chance of parole for 25 years. Both must also register with the DNA bank and sex offender registry and face a lifetime firearms ban.

In handing down the sentence, Judge Bruce Thomas said the pair's "vile and despicable" actions required them to be removed from society for most of their lives.

"You chose in the most violent way to satisfy your overpower lust," he said.

He noted, however, that no sentence could ease the loss and that Paquette's family should never wonder if they could have saved her.

"There was no blame for any of you here," he said. "The responsibility, all of it, lies with the two people in the prisoners' boxes." 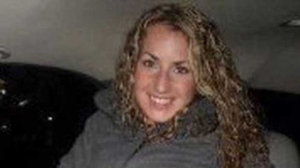