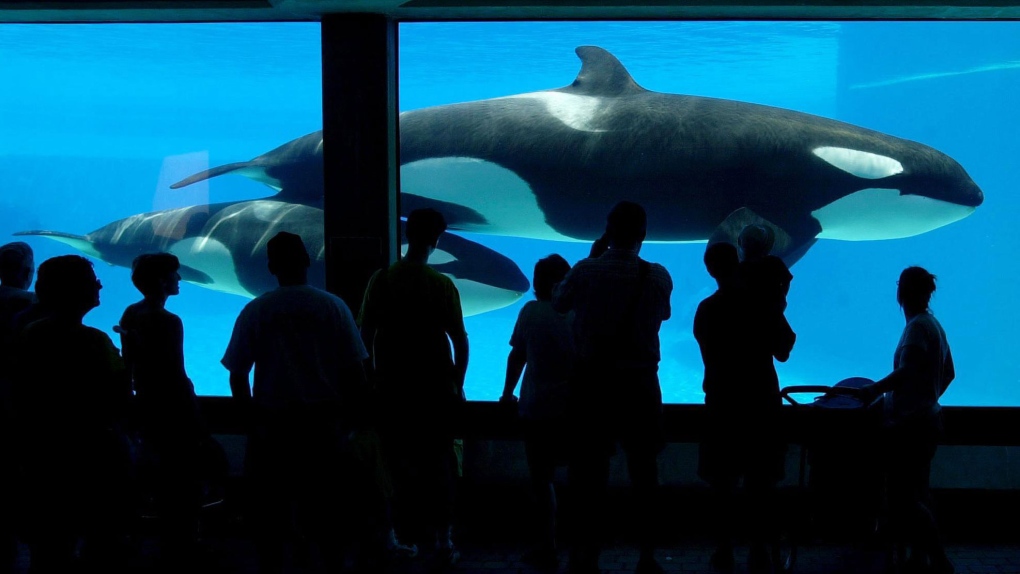 Tourists line up at a viewing area to see one of Marineland's newer attractions, a killer whale calf swimming with its mother in Niagara Falls, Ont. on Wednesday, July 18, 2001. (Scott Dunlop / THE CANADIAN PRESS)

TORONTO -- Bob Barker, former host of CBS's "The Price is Right," wants an upcoming ban on the breeding and acquisition of orcas in Ontario to include the country's lone killer whale at Marineland.

Barker said Wednesday he spoke to Ontario Premier Kathleen Wynne to congratulate her on the proposed legislation and urge her Liberal government to include Kiska, the killer whale, and all the animals kept at the Niagara Falls, Ont., theme park in the ban.

"(I asked) to have these other animals included as well, particularly poor Kiska, who is so miserable in that little pool they have her in," Barker said in a telephone interview.

A spokeswoman for Marineland said it "is unaware of Mr. Barker's experience or credentials as a marine mammal scientist that would cause his opinion to carry more weight than it might otherwise simply because he is a former game show host and television personality."

Marineland supports the government's approach to "obtain a clear, independent scientific opinion from leading marine mammal scientists and use their independent advice and recommendations to establish clear positive legislation and regulation to ensure the long term health and care of all marine mammals, including Kiska," Ann Marie Rondinelli said Wednesday in an email.

Wynne promised she would discuss the possibility of including Kiska in the ban with others and "perhaps they would do it," said the 91-year-old Barker, who played a key role in the relocation of three elephants from the Toronto Zoo to a sanctuary in California in 2013.

Ontario Community Safety and Correctional Services Minister Yasir Naqvi said the legislation would establish Animal Welfare Committees at facilities with marine mammals "to provide greater oversight and access to additional protections such as visits by veterinarians with expertise in marine mammals."

In reference to Kiska, Naqvi said Wednesday in a statement that the government's focus is "the health and well-being of Kiska and we want to do what is best for her and all other marine mammals in Ontario."

Rob Laidlaw of Zoocheck, an animal welfare agency, said Kiska should eventually be moved to a facility where she can be with other killer whales.

But Andrew Burns, a lawyer representing Marineland, last week told the Standing Committee on Social Policy -- which is discussing the proposed legislation -- that relocating Kiska would be impossible.

"She's very elderly, so it's the equivalent of taking someone who is 80 years old or 90 years old in an old folks' home and moving them into an apartment in the Village in New York," Burns said.

"It's going to be terrible for her and she wouldn't survive the trip, which is a hugely stressful event for an animal. To be moved, she'd have to be moved by airplane, and it would kill her."

He said the park supported another option for Kiska.

"It is entirely reasonable, achievable and appropriate to provide for her, on loan from another facility, an age-appropriate companion," Burns said.

"This bill, in its present form, precludes that."

The proposed legislation, which is expected to pass later this year, includes setting new standards on pool sizes, noise limits around marine mammals such as whales, dolphins and belugas, water quality and appropriate social groupings.