A large section of shoreline bluff, 15 to 20 metres above Lake Huron, has fallen into the lake, down Sunnyridge Road just north of Grand Bend.

It happened sometime in the past couple weeks.

Thankfully, the only thing that fell into the water was a hot tub, but a trailer now sits precariously on the edge the bluff, a few metres from being “over the edge,” as well.

Geoff Cade with the Ausable Bayfield Conservation Authority says he flew over the area in November, and there was still several metres between the hot tub and the edge of the bluff. 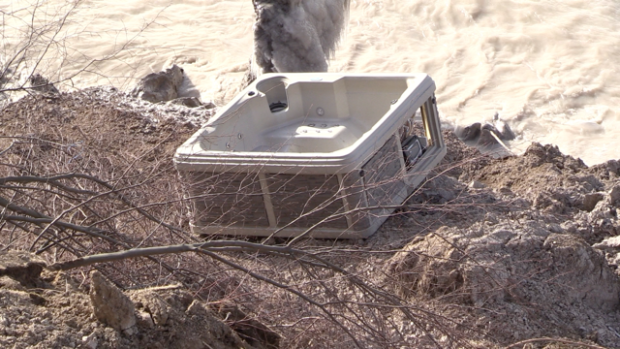 He says near record-setting lake levels, and strong southwest winds, probably dug away at the toe of the bluff enough to cause the collapse.

“This is a high-erosion area. We’ve estimated since 1935, on average, we lose a metre of bank a year,” says Cade.

But that doesn’t happen every year, and this year there’s been much more erosion, with more to come, he fears.

“It’s very difficult to try and stop this kind of erosion. What you don’t see here were previous attempts to put in sea walls, that simply failed. They may have worked in the short term, but not in the long term.”

It’s estimated there are over 1,000 structures along the Lake Huron shoreline are currently sitting in an erosion danger zone.

That means that a collapse of a section of shoreline bluff is expected or imminent in those areas.