Blacksmith leaving his mark on City of St. Thomas

"We really wanted to promote a community project that would not only help benefit families and tourism for the community but children," says Sue Bandeen of the RCRC.

"Children are the focus of the Rotary Club and this adds a feature that might inspire kids of all ages to try it out and enjoy the view."

"We looked around at what other parks or communities are doing and we have seen large-scale musical instruments before," says Matt Janes, vice-president of On Track St. Thomas. "People can come up here and enjoy themselves with kids and grandkids."

The two fully-tuned steel instruments will be joined by a third piece as well. McKay is currently working on it at his Forge shop in Lawrence Station, Ont. just west of London. 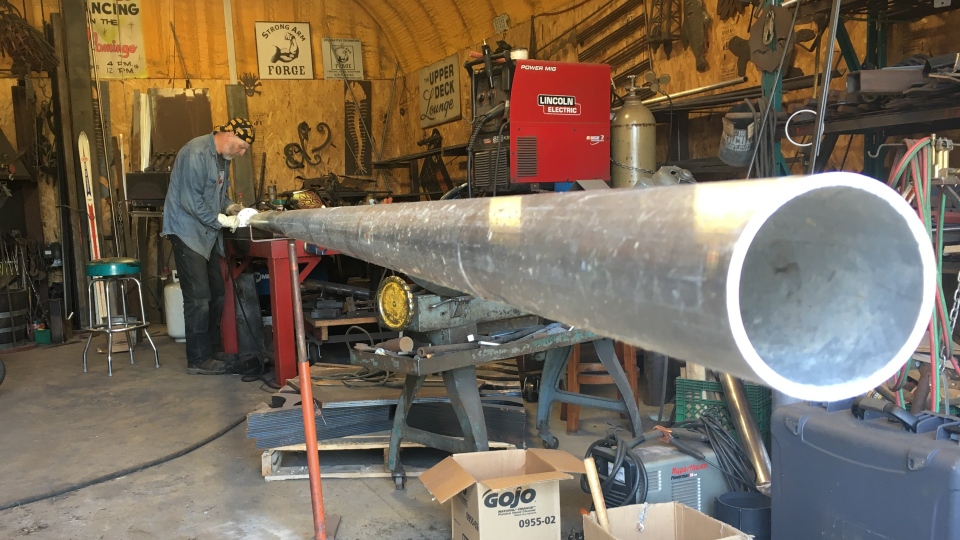 "It's called an Aerophone," says McKay. "An Aerophone is a long pipe that goes under the ground. People can talk into one end, and you'll be able to listen 20 feet away at the other end."

The Sonotube will be placed at the park when complete. COVID-19 will prevent visitors from getting the full enjoyment right now however. The mallets used to play the instruments won't be put in place until the spread of the disease subsides.

"People will get the idea, and for now they are visually appealing," says McKay. "It kind of ties the room together a bit with all the brightly coloured pieces."

These structures are just the latest projects he's been commissioned tot create by the city and the park to install around the area.

He's done "Perseverance" - the large train in the gateway roundabout on Sunset Drive - as well as "Fear the Wind" and the "Kinsmen Shade" at the Elevated Park.

He'll also be creating a massive soccer ball for 1Password Park in the north end of St. Thomas.

"The Elevated Park and the city including me in all these projects is great. It's the best part of my career," says McKay.