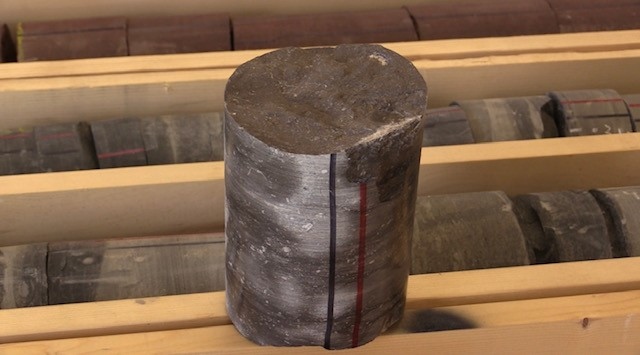 Martin Sykes holds some very special rocks in his hands inside a work trailer near Teeswater, Ont., the potential site of Canada’s first permanent underground storage facility for nuclear waste.

“It’s incredibly exciting to see these rocks coming out the ground, right here in South Bruce. Some of these rocks are 400 to 450 million years old. At the bottom of the borehole, over one billion years old,” said Sykes, the senior geoscientist with the Nuclear Waste Management Organization (NWMO).

But the rocks that Sykes and the NWMO really care about are the Cobourg deposits. This is the rock formation they plan to build a 1,500-acre underground facility in — to house all of Canada’s most radioactive nuclear waste.

“The target formation, the Cobourg, which would be the formation used for the repository itself, that was found at 650 metres deep. So we were able to confirm where we expected to see it,” Sykes explained.

Just up Concession 8 in South Bruce, a second borehole site is underway and the NWMO says the goal is to be able to let the public know whether the rock north of Teeswater can support the massive underground storage facility, meant to contain 5.5 million used nuclear fuel bundles by late 2022 or early 2023.

That timing is important, because citizens opposing the underground plan want a community referendum on the project be put on the ballot for next October’s municipal election.

“Since this project will have a tremendous effect on our community, it is necessary for us to get all the information put forward to the public so that the public can decide on whether they want to host this in our community, or not,” said Municipality of South Bruce Mayor Robert Buckle.

According to Sykes, testing of the how the water moves within their potential project site will continue through next year, along with the borehole testing, which should wrap up in about eight months.

“We’re looking at spring next year for the end of borehole site to site activities,” he said.

That will no doubt coincide with a heightened debate in the community on how best to decide whether or not the Teeswater area in Bruce County wants to house Canada’s high-level nuclear waste.

The NWMO wants to decide some time in 2023 whether South Bruce or Ignace, in Northern Ontario, will host the $23-billion project.