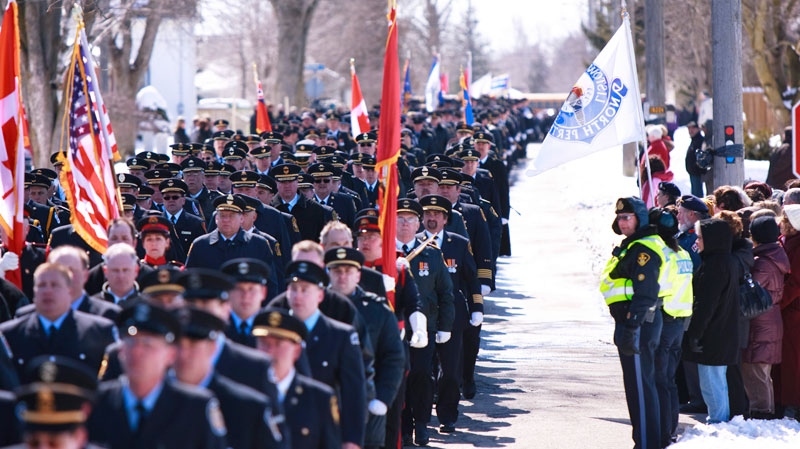 Thousands of firefighters from across Canada march through the streets of Listowel, Ont., to honour fallen fire fighters Ken Rea and Ray Walter on Thursday, March 24, 2011. (Geoff Robins / THE CANADIAN PRESS)

An Ontario private member's bill named after two firefighters killed in a roof collapse aims to protect others venturing into similar situations by removing some of the dangerous unknowns.

Volunteer North Perth firefighters Ken Rea and Ray Walter died in 2011 when fighting a fire at a dollar store in Listowel. They were unaware that the roof was made with lightweight construction material that becomes volatile in a fire.

Progressive Conservative Randy Pettapiece's bill would ensure commercial, industrial and multi-family dwellings with that type of construction material are identified as such with an emblem displayed prominently on the building.

"The bill recalls a heartbreaking chapter in the history of our area," said Pettapiece, who represents Perth-Wellington. The city of Stratford, and various townships in Pettapiece's riding are already using the emblems, he said.

"To minimize the risk we have to maximize information," Pettapiece said. "This issue is important enough to warrant a province wide solution, not just a patchwork of local bylaws."

North Perth Fire Chief Ed Smith said lightweight construction material is becoming quite popular and isn't a problem until there is a fire.

"I'm not condemning the type of construction," he said. "It's what we have to learn to deal with, but the issue is, we need something to help identify the particular buildings so we know we're dealing with that type of structure."

The letter R would be at the centre of the emblem if that type of construction material was used in a building's roof, an F if it was used in the floors and an FR if it's in both.

"When we respond to these types of buildings, usually we're responding in the worst conditions," Smith said. "Decisions have to be made within seconds to minutes on what we're going to do and to be able to identify that right away is a major contributor to the safety of our firefighters."

The Ontario Association of Fire Chiefs passed a resolution in 2012 to petition the government to make it mandatory that all lightweight constructed buildings be indicated as such.

The bill will go to committee hearings after passing a second reading vote Thursday afternoon with the support of the majority Liberal government.

"Six years ago what happened in that community was very tragic," said Community Safety and Correctional Services Minister Marie-France Lalonde. "The role of firefighters is tremendous. We want to say thank you for their role that they do every day."

"Keeping our Ontario firefighters safe is something that we can all agree on," he said.