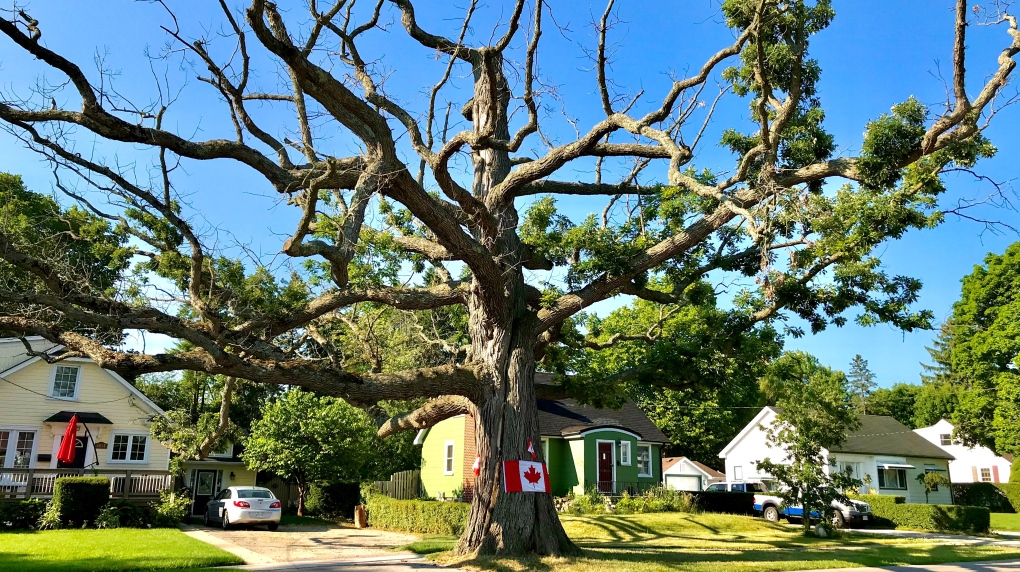 The Big Oak Tree in Lambeth has stood for hundreds of years, but in the fall of 2020 it will come down for good. (CTV London / Celine Zadorsky)

LONDON, ONT -- The ‘Big Oak Tree’ in Lambeth, which has stood for hundreds of years, was slated to come down this week, but now some tiny residents have given the ancient Oak a few more months of life.

The tree on James Street was there long before either Lambeth or London were established, but in recent years had begun to decline.

The city made the tough call to mark the tree for removal, but not until a beehive within the trunk of the tree could be safely relocated.

Officials with Forestry Operations now say that won’t happen until after the summer.

“We have postponed to the fall due to the bees so they are dormant for collection,” said Andy Beaton, manager of Forestry Operations, in an email to CTV News.

The beehive can be seen by anyone walking down James Street past the tree.

Some estimates have the tree at nearly 400 years old, which would make it the second-oldest tree in the City of London limits.

On Saturday former chief Myeengun Henry of the Chippewa of the Thames First Nation conducted a smudging ceremony to bless the tree.

A precise date for when the tree will come down is not yet known.