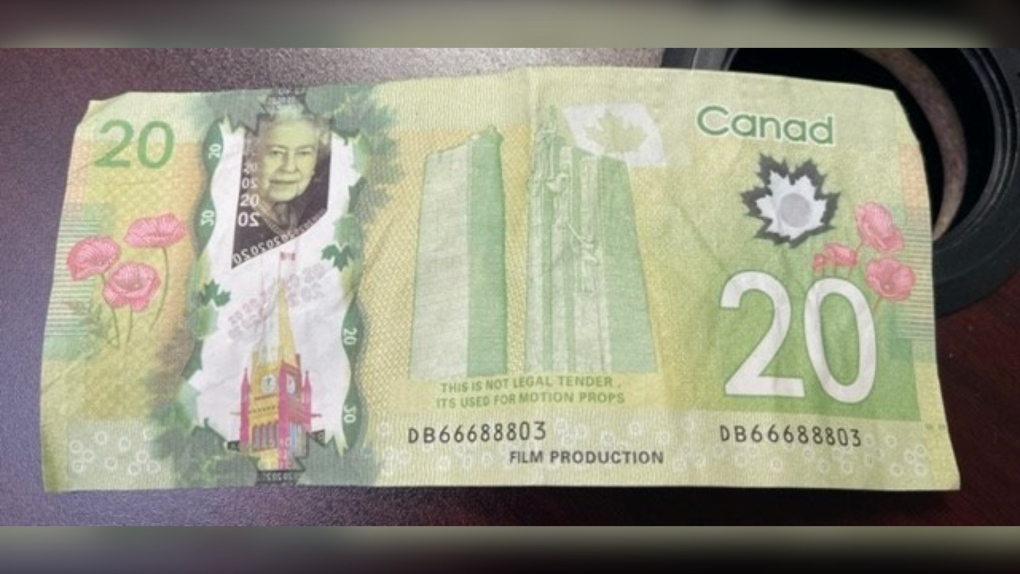 Aylmer, Ont. police are warning the public to be vigilant about their cash after counterfeit $20 bills were found in circulation. (Source: Aylmer Police Service/Facebook)

Upon first glance, this $20 Canadian bill might look like the real deal. But upon closer inspection it’s actually counterfeit, and that’s something police in Aylmer, Ont. are trying to warn local businesses and the public about.

According to a Facebook post from the Aylmer Police Service, police are warning the public Tuesday to be aware of counterfeit $20 bills that are circulating through the Town of Aylmer.

There are a multitude of ways to determine the veracity of the bill, one of which is that all the counterfeit bills have an identical serial number of “DB66688803.”

Police also say the bill will lack a transparent strip where the Queen’s photo is, and an “a” will be missing from the word Canada.

Also highly visible in the centre of the counterfeit bills are the phrases “Film production” and “This is not legal tender it’s used for motion props.”

“We encourage business owners to educate their staff in an effort to help combat fraud,” Aylmer police say.

Are magic mushroom stores the next pot shops?

Magic mushroom dispensaries are popping up in cities across Canada, with customers ranging from those looking for treatment for depression or PTSD to people wanting to 'micro-dose' a small amount of psilocybin, the hallucinogenic compound in magic mushrooms. But while the situation is in some ways reminiscent of when cannabis retailers set up shop before marijuana was legalized in 2018, Health Canada says there are no plans to legalize or decriminalize psilocybin products.

The U.S. is tracking a suspected Chinese surveillance balloon that has been spotted over U.S. airspace for a couple days, but the Pentagon decided not to shoot it down due to risks of harm for people on the ground, officials said Thursday.

One of Saskatchewan’s oldest hockey rinks has garnered national attention for its unique features and unusual design.

A paramedic signing off for duty for the last time got choked up and teary-eyed during his final radio call to colleagues.

Quebec recommends booster only to vulnerable never infected with COVID-19

Quebec is changing its vaccine strategy: public health officials are now recommending booster shots only for vulnerable people who have never had COVID-19.