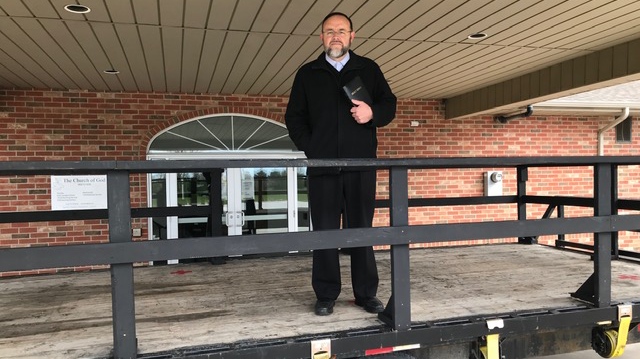 Pastor Henry Hildebrandt of the Church of God in Alymer, Ont. stands on a platform placed in front of his church utilized to deliver his sermon on Friday, April 24, 2019. (Sean Irvine / CTV London)

Henry Hildebrandt, 57, has been charged with participating in an outdoor gathering which exceeded 25 people, in violation of the Reopening Ontario Act.

On Friday, Hildebrandt posted a video to social media in which London police officers attended his home and handed him the ticket and summons.

In the video, Hildebrandt said he intends to "do nothing" with the ticket.

On Sunday, roughly 200 people attended the rally in London to voice their displeasure with government COVID-19 protocols.

On Wednesday, police announced they had charged three London women as organziers of the event.