'Autism isn't a slur, it's a superpower': London politician turns sign vandalism into a positive message

'Autism isn't a slur, it's a superpower': London politician turns sign vandalism into a positive message

Damaged signs during election campaigns are an unfortunate reality, but one London, Ont. municipal candidate says vandalism to one of his signs went too far.

"When these slurs start being used against an entire community of differently abled people that's when I have to stand up on their behalf,” says London Ward 11 candidate Jeremy McCall.

A marker was used to deface both sides of the sign, including the terms “Jimmy McTard” and “autismaloid.”

McCall's wife, Joy, was actually first to notice the vandalized sign over the weekend, telling CTV News London, "My wife worked overnight on Saturday night and she was on her way home on Sunday morning at 7:00 a.m. when she saw the sign on the side of the road as she drove by. She stopped and turned around and grabbed it." 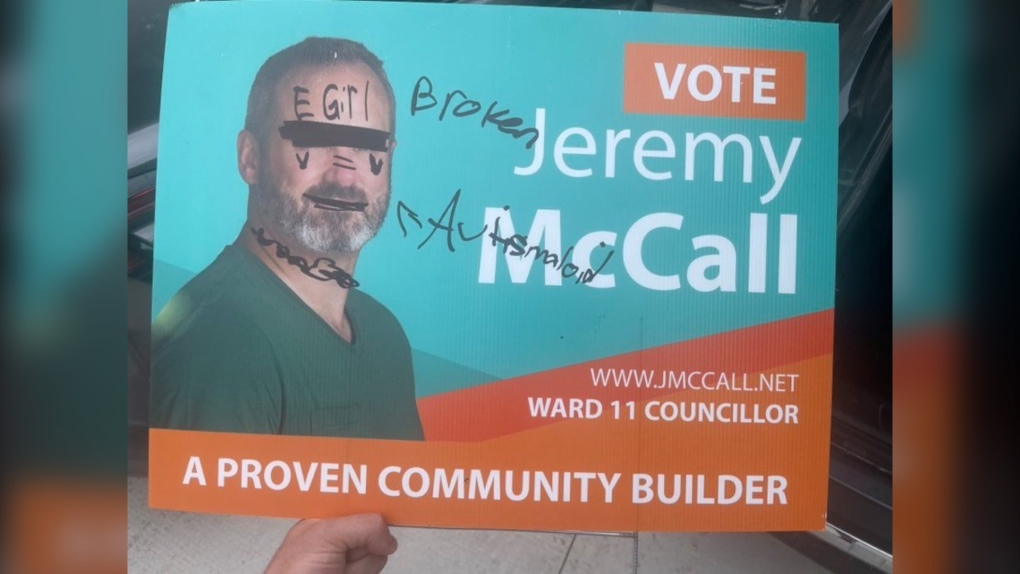 McCall pushed back with words and deeds, going on social media to say, “Autism isn't a slur, it's a superpower.”

He also made a donation to the London branch of Autism Ontario and encouraged others to do the same.

"We always fight ignorance with education and compassion,” he stresses. “Obviously this is coming from a place of a little bit of hate and some misunderstanding. I think there's an opportunity for us to come together and show the autism community that we do support them."

"Mr. McCall has actually turned this into a positive by encouraging people to donate to Autism Ontario,” says Michael Cnudde, a communications specialist with Autism Ontario. "I think it just emphasizes the need for further education, further acceptance about autism."

McCall acknowledges that some people may have strong opinions about certain candidates or their policies but says defacing signs or disparaging others is no way to deal with those issues.

"This isn't about me but it is about everyone else that this impacts,” he says.

If you can chip in please click below and change region to west at bottom of list and get your tax receipt :https://t.co/1dqnq6AWDT pic.twitter.com/pthzPv0J1e