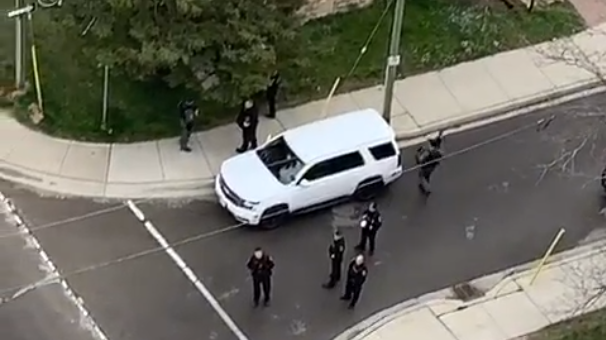 London police seen from a high rise in the area of King Street and Hewitt Street on Sunday, May 10, 2020. (Courtesy Ena Hilda)

LONDON, ONT -- London police have a man in custody following a weapons call that saw heavily armed officers descend on a neighbourhood near the Western Fair District Sunday.

Two others were arrested on outstanding warrants in the area during the time of the call.

The call came into police around 2:15 p.m. after a man reported being threatened by an unknown man with a knife.

According to the victim the man then entered a nearby home and returned to the porch carrying what appeared to be a long gun.

Police closed off the area and executed a search warrant on the home around 11:15 p.m.

At that time the suspect was arrested and a replica gun was found.

Police reopened the area around midnight and reported that no one was injured during the incident.

While the suspect is in custody charges are yet to be laid and the investigation is ongoing.