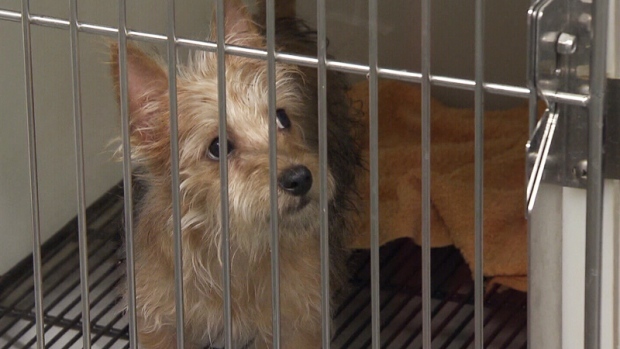 TORONTO -- Ontario's top court is scheduled to hear an appeal Tuesday in a case dealing with the policing powers of the province's animal welfare agency that has touched off a far-reaching legal debate about private law enforcement in Canada.

In January, a lower court ruled that giving the OSPCA those powers was unconstitutional. Justice Timothy Minnema took the rare step of introducing a new principle of fundamental justice that "law enforcement bodies must be subject to reasonable standards of transparency and accountability." He gave the Ontario government a year to rewrite the laws.

Word of the new principle, however, reverberated throughout the legal community across the country.

"It turns out private policing in this country is much more widespread than I thought," Andrews said in an interview. "We're talking about the privatization of a fairly key component of the justice system."

In addition to Bogaerts and Ontario's attorney general, the Court of Appeal for Ontario will hear arguments from five interveners that include Animal Justice, the Attorney General of Canada, the Information and Privacy Commissioner of Ontario, the Canadian Civil Liberties Association and the Railway Association of Canada.

At issue will be Section 7 of the Canadian Charter of Rights and Freedoms that states "everyone has the right to life, liberty and security of the person and the right not to be deprived thereof except in accordance with the principles of fundamental justice."

The arguments will focus on the principles, which are "the unwritten parts of the constitution and created by common law," said Camille Labchuk, the executive director of Animal Justice, which was the sole intervener in the lower court case.

"We feel for law enforcement to be effective, it must be accountable, and transparent and overseen by the government," Labchuk said.

"When you hand over that function to a private charity without any accountability, transparency and oversight, the public loses confidence in that system and it ends up having negative results."

Labchuk said the OSPCA case could have far-reaching implications for the way animal laws are enforced in Canada.

Animal cruelty enforcement is largely carried out by private organizations across the country, namely other SPCAs, except for Manitoba, Newfoundland and soon Ontario, where the provincial government is expected to introduce a new model in the fall that complies with the court's orders.

Both the Ontario and federal attorneys general argue the judge erred when he made a new fundamental principle of justice, saying it was "imprecise and unworkable."

"What they're essentially saying is they do not want their powers to legislate constrained," Andrews explained.

The case also drew the attention of the Canadian Civil Liberties Association, which supported the new principle, pointing out the increasing use by municipalities of private security firms to enforce bylaws.

"That is very important to us because the CCLA takes very seriously the fundamental rights and freedoms of all people in Canada," said Noa Mendelsohn Avi, the group's director of the equality program.

Another branch of the Ontario government, the Information and Privacy Commissioner of Ontario, has joined the legal fray in support of the new principle and in opposition to the province's attorney general.

"Despite the fact freedom of information is by all appearances a well-entrenched right here in Canada, here we are closing in on 2020 and there are still bodies in Ontario with law enforcement powers that are not subject to the freedom of information laws," said Stephen McCammon, a lawyer with the commissioner.

"This case, Bogaerts, has the potential to help fill in those gaps."

There are at least eight other private, not-for-profit organizations in the province that enforce various laws, including the Bereavement Authority of Ontario, which administers provisions of the Funeral, Burial and Cremation Services Act on behalf of the provincial government.

Another group that'll have a say is the Railway Association of Canada, which represents about 60 freight and passenger railway companies, including the Canadian National Railway and the Canadian Pacific Railway. The rail companies have had their own police forces for more than 100 years under the Railway Safety Act.

The association is opposed to the new principle, saying it is "vague and unworkable" and, if upheld, should be confined to the circumstances of the OSPCA.

"The ambiguity of the application judge's findings could undermine the lawful authority of railway constables and other peace officers employed by private organizations who are legitimately and successfully acting in the public interest," the association argues in court documents.