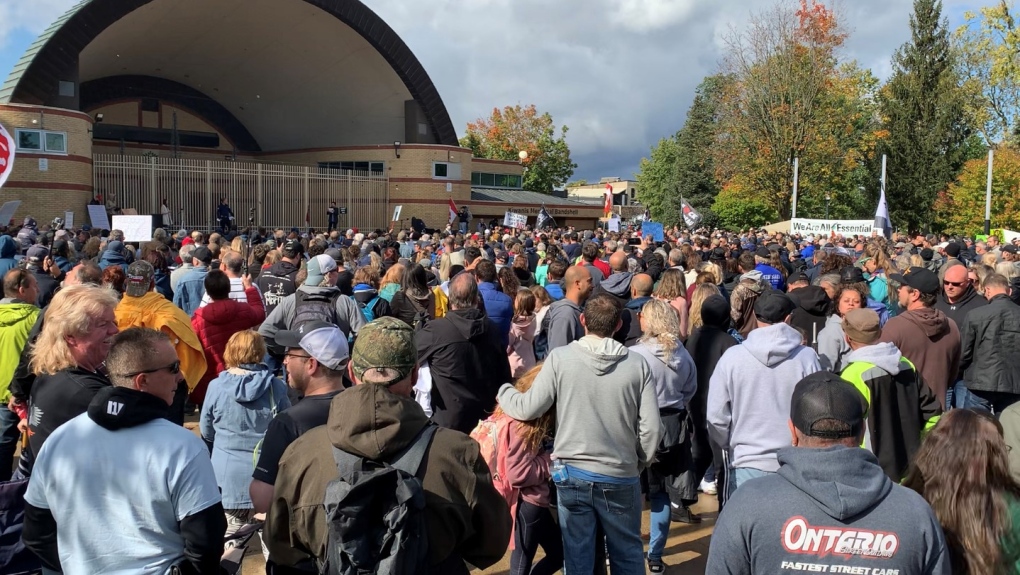 A crowd of supporters of controversial vaccine mandate and mask opponent Chris Saccoccia, also known as Chris Sky, turned out at Victoria Park on Saturday afternoon.

Saccocia had dubbed the rally 'Back the Blue,' saying it was in support of London Police Service officers opposed to the force's vaccine mandate, but police said they were not involved in the event.

⚠️ The London Police Service is aware of social media posts advertising an event and attempting to fundraise, using our crest, and pretending to be LPS supported. This is not true. If you don’t see it on our verified social media accounts, be wary.

In a video posted to Twitter Saturday morning, Saccoccia reported supporters were driving in from outside the city, including from the Greater Toronto area and Windsor.

London police staff, both sworn and civilian members, as well as auxiliary officers, volunteers, co-op students and students or other citizens participating in LPS programs, had until Friday to provide proof of COVID-19 vaccination.

Those who fail to provide proof of vaccination, or who are not subject to an approved accommodation, will be subject to mandatory educational sessions and may be subject to additional measures up to and including termination.

Saccoccia tweeted Friday that a law firm was submitting a letter to London police to fight against the policy, but no additional details have been released.

Merchandise was being sold at the rally, purportedly in support of legal action on behalf of police officers.

Another rally, another false equivalency drawn between vaccine mandates and Yellow Stars from Nazi-occupied Europe.

“It’s supposed to be inflammatory.”