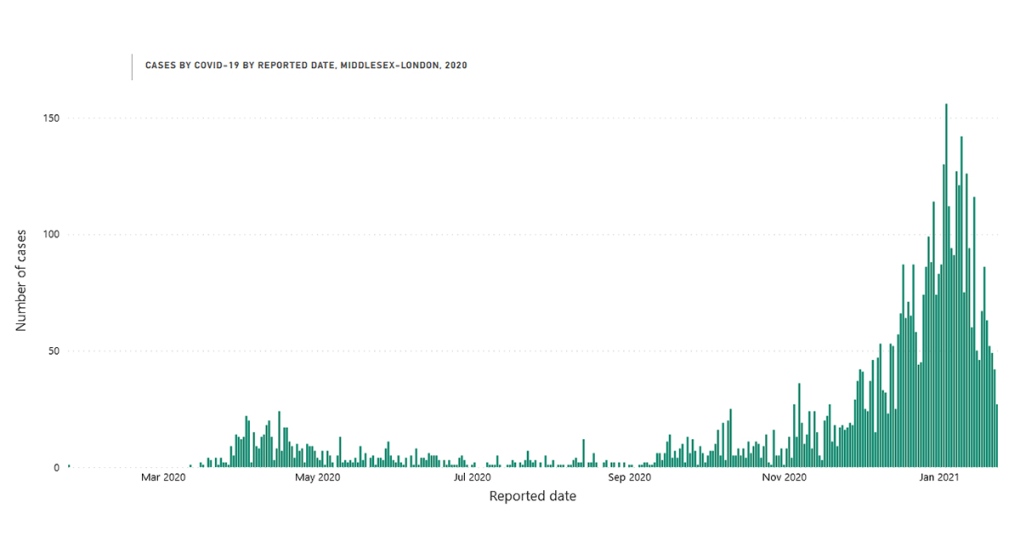 COVID-19 cases by reported date are seen in this graph from the Middlesex-London Health Unit captured Monday, Jan. 25, 2021.

MLHU Medical Officer of Health Dr. Chris Mackie says this is the first time in a month the numbers have been this low.

"The shutdown that went into place Dec. 26, that shutdown is definitely having an effect here, and the lockdown…will start to play out in the numbers now as well, so that will be definitely part of what you're starting to see here."

The two deaths, a woman in her 70s and a man in his 90s, were both associated with a long-term care home, and bring the total deaths at seniors' facilities to 94.

There are ongoing outbreaks at 13 area long-term care or retirement homes, and at the London Health Sciences Centre's (LHSC) University Hospital and Strathroy Middlesex General Hospital.

No patients are involved in the ongoing outbreak at University Hospital which has so far impacted nine staff, while outbreaks in two units at LHSC's Victoria Hospital were declared over on Saturday.

LHSC says there are currently 15 inpatients, including six in critical care, and 21 staff members who are positive for COVID-19.

When vaccinations of residents at all long-term care and high-risk retirement homes are complete, just over 6,000 residents, in addition to 10,000 health-care staff who went to the vaccine clinic at Western Fair, will have been inoculated.

Mackie says, "Things are really moving in a positive direction in terms of getting those high-risk folks protected in our area."

The most serious is at Maple Manor Nursing Home in Tillsonburg, where 85 residents and 52 staff have been affected and 20 people have died.

Meanwhile at PeopleCare Tavistock, 46 residents and 36 staff have tested positive and there have been nine deaths.

Huron Perth Public Health continues to deal with a major outbreak at Caressant Care Nursing Home and Retirement Home in Listowel, which has a total of 106 cases. Meanwhile another large outbreak at Exeter Villa was declared over on Sunday.

Ontario is reporting fewer than 2,000 new COVID-19 cases, as Canada marks one year since the first case was reported in the country.

225 million jobs were lost worldwide in 2020 thanks to the pandemic, report finds

U.S. COVID-19 numbers drop, as the race against new strains heats up

Filipina front-line workers are turning their pandemic struggles into art

'It wasn't called COVID at the time': One year since Canada's first COVID-19 case

Trump's virus adviser says some saw it as 'hoax'

Too soon to know if Canada's COVID-19 case decline will continue, Tam says

'Check it twice': Daughter baffled after her mother receives Moderna and Pfizer vaccines

The megarich have already recovered from the pandemic. It may take the poor a decade: Oxfam