Shielded by anonymity, a survey of London city councillors offers an unvarnished look at how they view their salary, workload, and colleagues.

Nine of the 14 members of city council recently answered a series of questions for consideration by the Council Compensation Task Force.

The task force is made up of community members who will recommend how much councillors should be paid next term (2022-2026).

The written comment provided anonymously by a councillor identified as #7 contains several complaints about the current compensation of $52,725 a year, including:

“Councillor’s (sic) currently make less than their own admin. assistants… where else in any workplace would you find that?”

Also, “If staff were compensated the way council is, it would be called exploiting employees.”

Each year, council must vote to either accept or decline an inflationary increase to their pay based on the Consumer Price Index or the Labour Index, whichever is lower.

Anonymously, Councillor #9 refers to the process of approving their own raise as, “an annual controversial virtue signalling event.”

Sharp-tongued Councillor #7 writes, “It is a political circus and a distraction for the council and residents of London.”

Calling for a fair distribution of pay based on workload, the councillor identified as #4 writes of colleagues, “Many sit on standing committees that meet the fewest (times) and have (the) lightest workload.” 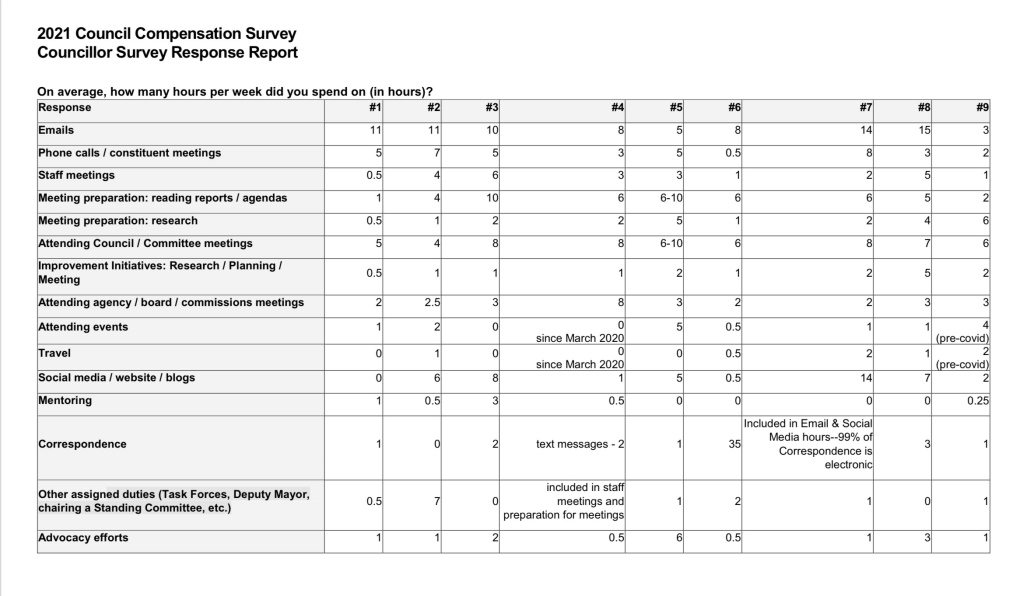 “Its not surprising that some feel others are not pulling their weight, but that often happens in a lot of workplaces,” Levin explains.

The survey also offers a glimpse at the hours spent on municipal business by city hall’s decision-makers.

All nine councillors identified ‘responding to emails’ as consuming the most or second-most number of hours in their week.

Anonymously #1 explains, “the more experienced I become, the better I am able to prioritize my time. You can spend 30 hours a week or 70 hours a week depending on issues in your ward and if you want to do more.”

He recommends future task forces including a councillor who did not returning from the previous term, “When you don’t have that, you are missing that point of view”.

Despite their complaints about pay, Councillor #7 states,“There can be many sleepless nights of concern for the people we are sent to represent.”

The anonymous survey of councillors, and a separate survey of residents, will be in front of the Council Compensation Task Force next week.

The task force has been directed to complete a report recommending councillor pay by March 31.

“It’s a tougher job than ever before,” admits Levin. “But trying to pick the right number, some with be satisfied, some will always be disappointed.”

A link to the survey can be found here.

Rising global temperatures could reduce the amount of sleep people get every year, according to a new study.