Ancient Lambeth oak tree may have some life yet to give

LONDON, ONT -- For a moment, it seemed like the end was here for a 400-year-old tree in Lambeth.

The last that residents had heard was that the tree was beyond saving and would be cut down before the end of the year.

“I’ve been here for over 20 years and it’s kind of like family for me,” says Bob Ford, who lives on James Street.

Throughout the year residents could be seen taking pictures with the giant oak, once called “The Gathering Tree,” according to local knowledge.

So when equipment arrived Tuesday on James Street it appeared the end was finally here, but not so fast says Councillor Anna Hopkins.

“It’s old and it needs to be taken care of. If the old oak tree is not a veteran there probably is no other tree in London that is as old as the one in Lambeth.

Nothing is certain but there may be a chance at giving the tree some extended life.

“It’s going to appear very different,” said Hopkins. “We’re going to see step by step if this tree can be prolonged.” 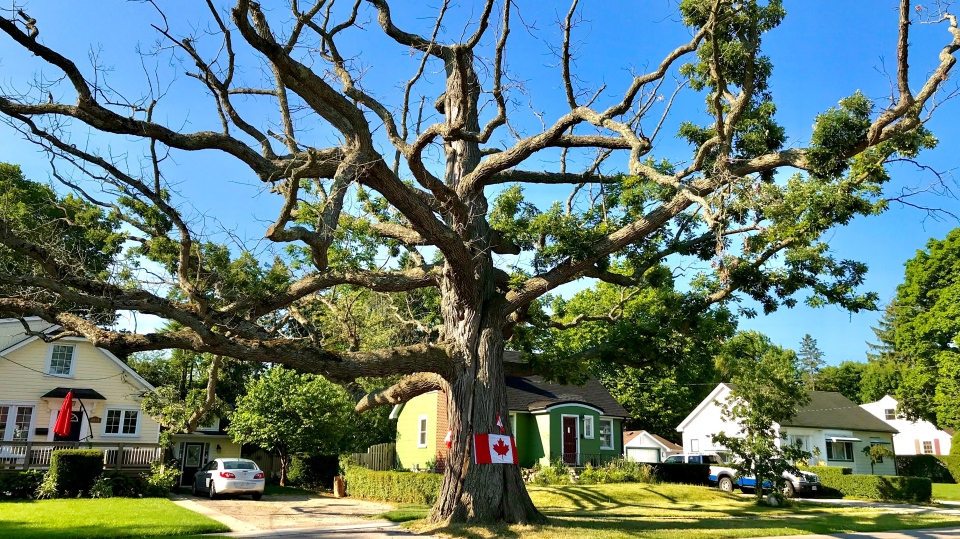 That first step is to do some canopy removal. Some of the crown needs to be removed as all the dead limbs are a safety issue.

“We’re doing our trim on this tree, we are removing all the dead and cutting it back to life, as mother nature would do,” says Rob Wydeven, supervisor of Forestry Operations for the city.

That is the work that is being done Tuesday.

While the tree is having a massive number of limbs removed, it does prove that one tree’s trash is another person’s treasure.

“We’re going to keep some of it to cut up and make charcuterie boards and maybe some live-edge tables to keep the memory of the tree,” says Ford.

Once the trimming is done the team will do a special sonar test of the tree to see if there is anything that can be done to prolong its life.

“It’s kind of exciting to see what they can do, but it’s a process,” said Hopkins.

For some the news comes with mixed feelings.

Some residents tell CTV News that they feel the tree is losing its majestic appeal and that it should just be cut down at this point.

The “Big Oak Tree” is one of London’s oldest trees, but in recent years its decline has been obvious.

The tree has been under observation for years. It has received deep-root fertilization but that hasn’t worked and the tree has continued to decline.

It remains unclear if these new efforts will have any affect, and after Tuesday the tree will look very different.