An appropriate tribute to the fallen in London on Remembrance Day

LONDON, ONT. -- There was no parade, no choir, and there were no buses full of veterans from Parkwood Hospital watching nearby.

And while it was different, make no mistake, the fallen were remembered at London’s cenotaph this Nov. 11, 2020.

As Master of Cermonies Jim Swan put it, this is “a totally different year.”

On a sunny and comfortable morning, a few hundred Londoners spread out around Victoria Park to pay tribute - in person.

But within the barricaded area of the cenotaph itself, the crowd was kept to limits set by the Middlesex-London Health Unit.

London Remembrance Day committee Chair Randy Warden was pleased most Londoners played their part by watching from home, or the office, on broadcasters like CTVNewsLondon.ca

“We asked Londoners to stay home to stand on their front steps and pay respects to two minutes of silence, and some people went to veterans' cemetery to just reflect on the souls that are buried there."

The service at the cenotaph was limited to a few government representatives, organizers and most notably veterans.

A sole designate represented active and retired members of the Canadian Army and the Royal Canadian Navy and Air Force.

Also in attendance was this year’s Silver Cross mother, Carolyn Wilson, the mother of Trooper Mark Wilson, who was killed in action in Afghanistan in 2006. 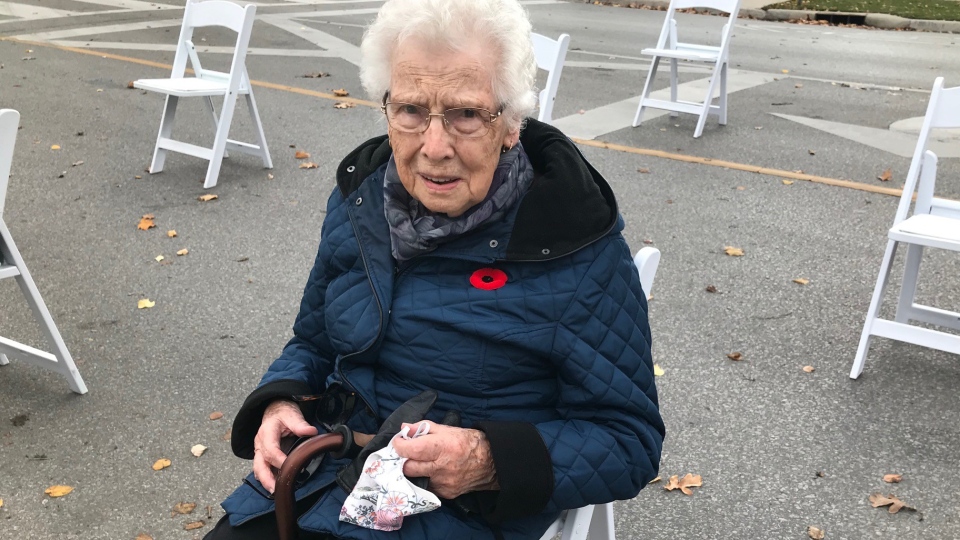 Her grandson was part of a crew that flew a Hercules aircraft over the cenotaph at 11 a.m. in tribute to the fallen.

Pasma knows the impact of war well. She survived Nazi occupation in Holland, telling CTV News those terrifying days are imprinted in her mind.

“I know, I can tell you from the first day to the last day."

Just two chairs away from Pasma was Canadian veteran Pete Schussler, who was among the thousands of Canadians who liberated Holland in 1945.

Schussler served as the sole representative for all living Second World War veterans in the London area for 2020.

As CTV News pointed him out, Pasma turned towards him with admiration, and stated, “We were freed by him and those Canadians, that is very, very, important."

While the crowd was limited, Londoner Bill Mills made sure his family was nearby.

Sitting about 200 metres from the cenotaph, Mills displayed his father’s pictures and medals, for service in a Halifax Bomber, during the war.

“I think people can see we had to be here,” he told CTV News.

Wearing a mask, he stated his father, William Fredrick Mills, instilled the value of remembrance in his children.

“We used to come to the parades every Nov. 11. He unfortunately passed away six years ago. So it’s important to be here.” While there was live music during the service, to protect against the spread of COVID-19, only a bugler and piper participated.

It was a fitting and safe tribute, as London, as the nation, took two minutes to remember those who preserved our freedoms.

This year’s ceremony carries a special weight as it marks the 75th anniversary of the end of the Second World War.