American launches campaign to repay Sarnia for cost of floaters 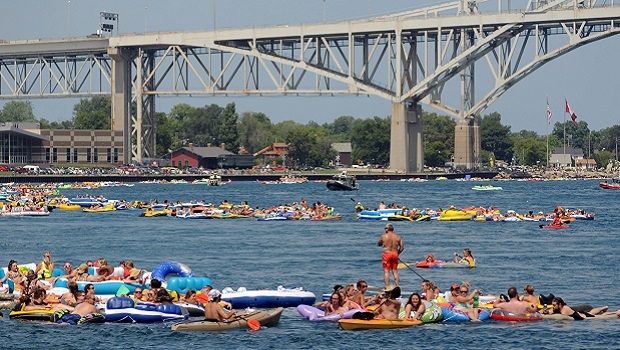 In this Sunday, Aug. 16, 2015, photo, floaters head down the St. Clair River during the annual float down, in Port Huron, Mich. The float down starts a Lighthouse Beach in Lake Huron and ends in south Port Huron and Marysville. (Andrew Jowett/The Times Herald via AP)

SARNIA, Ont. -- The mayor of an Ontario border city that was unwittingly visited by 1,500 wayward Americans over the weekend says he'd like the temporary visitors to return -- but this time with money, clothes and passports.

Sarnia Mayor Mike Bradley says it cost his municipality more than $8,000 after Americans on inflatable rafts and boats drifted seriously off course Sunday due to high winds and strong currents during the annual Port Huron Float Down down the river that divides Michigan and Ontario.

He says the city will cover the costs incurred to deal with the visitors, which included shipping them back across the border in city buses.

An American, meantime, has started an online campaign to repay the city, and so far has raised about $2,000 in one day.

Bradley says he appreciates the gesture and says his city will use any money raised by the campaign to celebrate cross-border relations.

The mayor says many of the visitors were "over-refreshed" and chanting "USA, USA" as they washed ashore in Sarnia.

"Everyone who responded -- police, fire, and the coast guard -- took the right approach," Bradley said.

The event started at Port Huron's Lighthouse Beach and was supposed to end at Chrysler Beach in Marysville along the St. Clair River.

On Monday, city workers spent several hours picking up trash -- beer cans, coolers, rafts and even picnic tables -- that washed up on shore.