LONDON, ONT. -- One of the rising budget pressures on property tax bills may not hit as hard as first predicted.

On Monday, the Middlesex-London Paramedic Service (MLPS) Authority Board tabled its 2021 Draft Budget, about $3 million lower than projected earlier this year.

The newly revised budget projection is just shy of $46.9 million.

“Your costs are going down compared to the original estimate,” explained Middlesex County CAO Bill Rayburn during the virtual meeting.

Rayburn added that changes to provincial funding could further augment the amount. 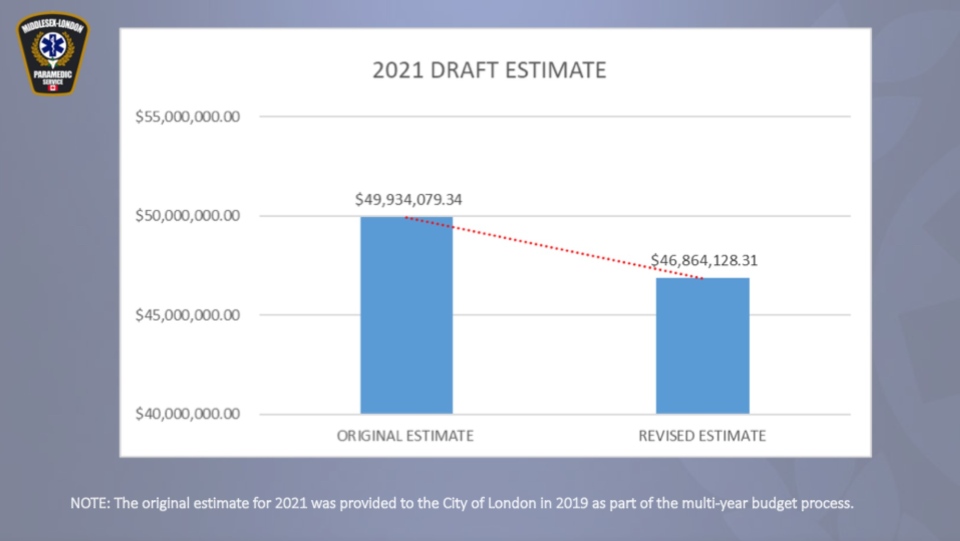 Savings are related to slower growth of call volumes.

Three new 12-hour ambulances will be added to the fleet next year, plus 12-full-time paramedics to staff them. Previously, the authority board had estimated needing three 24-hour ambulances to meet rising demand.

On Tuesday, London Mayor Ed Holder expressed optimism about the impact on the municipal budget.

Land ambulance service is a shared responsibility between the city and county.

The draft MLPS budget must still be approved by Middlesex County Council in March, however, City Hall will incorporate the revised estimate during its budget deliberations in December.

Holder says lowering the cost pressures in the second year of London’s four-year budget will further smooth out tax increases.

“It really speaks to what a multi-year budget is about,” adds Holder.

In 2020, the approved budget for land ambulance service was $43.1 million.

An application has been made to the provincial Ministry of Health and Long-Term Care to cover an additional $1.8 million in COVID-19 pandemic costs.