ST. THOMAS, ONT. -- While businesses considered 'non-essential' prepare to shut their doors for the next month, the province is continuing to allow big box retailers to sell similar items.

"Our downtown businesses are significantly affected because of that," says Sean Dyke, general manager of the St. Thomas Economic Development Corporation (STEDC).

One of those businesses is Saint T on Talbot Street.

Male recently opened up a second retail location on the main street, and now both his clothing stores are going into lockdown.

"I'm just here to give small dudes an opportunity," says Male."I came from Uganda to Canada just for opportunity. Allow us to get similar treatment. I'm not hating on Walmart because people feeding their families in Walmart, but small guys have got families too."

Earlier this month Ontario Premier Doug Ford explained the reasoning for his decision.

"It's not fair, I know it's not fair," Ford said on Dec. 2. "But it limits people from making five or six stops on the way home."

"We are hopeful that people will go only for essential goods," added Christine Elliot, the deputy premier of Ontario.

"We are really asking people to support small businesses, please continue to order from small and local businesses during the lockdown. That will help them get through this as well."

London Mayor Ed Holder got angry during Monday's media briefing, and went on a rant about the local versus big box disparity.

The Canadian Federation of Independent Business (CFIB) has also challenged Ford. They have a petition online asking the province to amend its restrictions and guidelines. 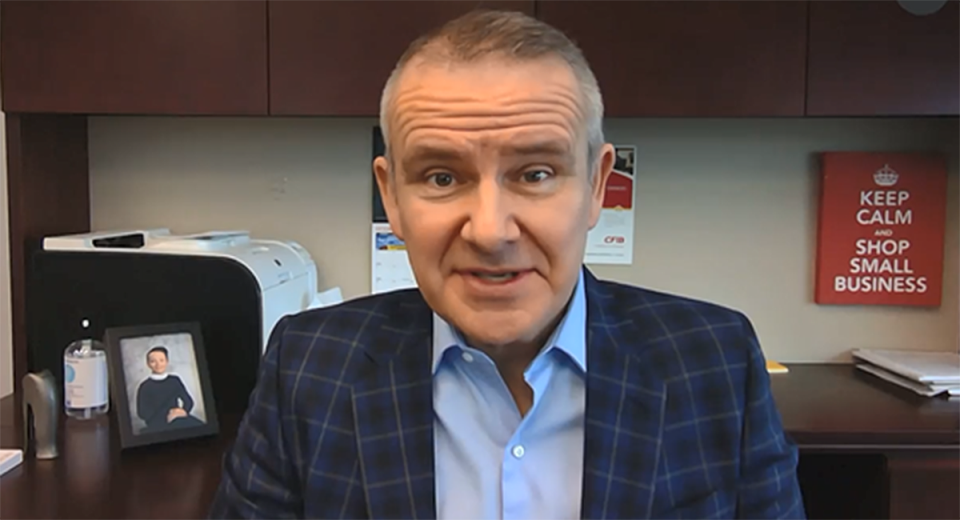 Dan Kelly, president of the Canadian Federation of Independent Business, is seen in this file photo.

"If anything there should be further restrictions on the big guys because that's where there are large numbers of people gathering together," says Dan Kelly, CFIB president.

"Only Ontario is doing it this way, no other province in Canada has announced this weird scenario which closes small firms and allows big stores to open."

The government has announced the new Ontario Small Business Support Grant, which will provide a minimum of $10,000 and up to $20,000 to eligible small business owners.

Kelly gives credit to the province for the new grant opportunities calling it a 'solid program' but says other provinces had these opportunities months ago.

"Even if it is fully used it's not going to be enough to help small firms that are entirely shut down to survive until pandemic is over," says Kelly.

"We're looking at weeks and months of economic ramifications before there is enough vaccines to resume normal business. The programs the province have announced are helpful, but insufficient to deal with the size, scope and length of the pandemic."

Dyke says the lockdown is tough because all the businesses will have to keep paying rent, and their employees for the next month.

He feels the local businesses have shown resiliency, "We've been impressed with how they have bounced back and thrived in some ways once we've been open again, but it really has been a challenge all along."

Male credits the residents of his hometown for showing support and buying online during the tough times earlier this year.

He understands that the next month is going to be tough for many local retailers.

"If you ain’t a hustler it’s gonna to be tough," says Male."If you don't have money packed up for emergencies, it’s gonna be tough."