Between flooded roads and flooded basements, London and surrounding regions were left drenched after a significant rain event rolled through the area.

Middlesex County declared a State of Emergency due to widespread flooding throughout the county Wednesday evening.

Some regions experienced nearly 100 mm of rain in roughly 24 hours, leaving many roads flooded and in danger of washing out.

All local roads in Southwest Middlesex were closed to the public and a significant weather event was declared, according to the municipality.

As of Thursday morning all roads have reopened across Middlesex, but the county says that while all roads are open there are several shoulders that have been washed out.

County crews were working throughout the day to repair the damage.

The river is running high and fast. It has flooded the parking lot in Harris Park (where council approved an apartment building be built). Be safe today. #ldnont pic.twitter.com/OGbambQLbJ

At Shady Pines campground near Nairn, 30 overnight sites were taken over by the swollen and fast moving Nairn Creek. 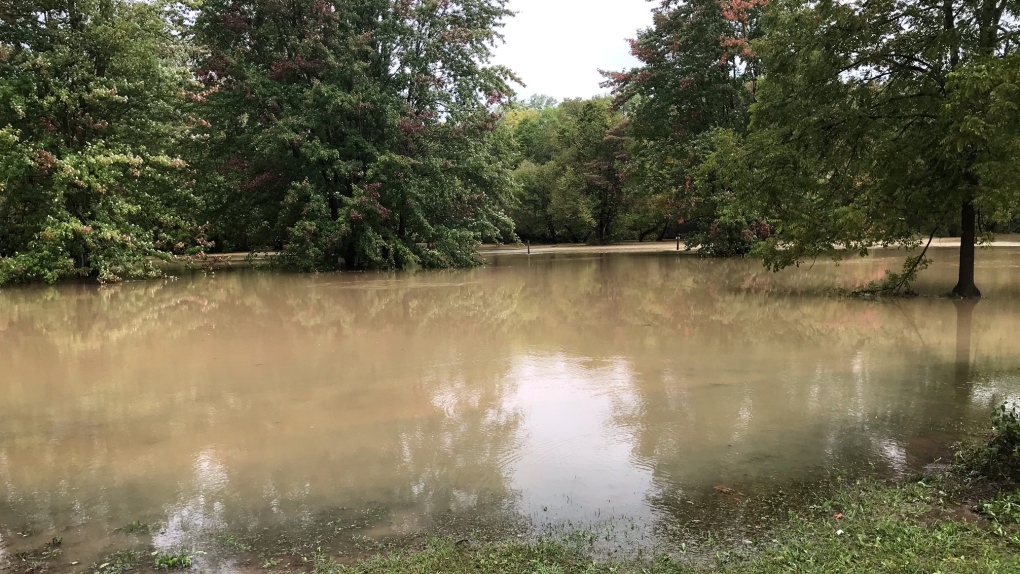 Shady Pines campground near Nairn was taken over by the swollen and fast moving Nairn Creek as seen here on Thursday September 23, 2021 (Sean Irvine / CTV News)

And farmers are taking stock of the potential damage to crops if the water doesn't run off quickly.

He says, "If it drains away in the next couple days, it'll probably be alright, but there could be some quality issues later on."

In London proper several roads were left underwater Wednesday evening and overnight due to the heavy rain.

The City of London closed Oxford Street between Beaverbrook Avenue and Proudfoot Lane.

A video posted to Reddit shows an LTC bus filling up with water as its driver attempted to navigate the flooded roadway.

A portion of Dingman Drive was also closed due to flooding as was Pine Street between Ash Street and Hume Street.

Flood warnings have been issued by numerous convservation authorities including the Upper Thames Valley Conservation Authority (UTVCA), which is warning people not to go near waterways at this time.

The UTVCA says that despite the rains easing the waterways can remain high and dangerous for several days, stating the Thames River reached boating ban levels.

Environment Canada ended its rainfall warning for the region as of Thursday morning, but not before some bus routes were impacted.

SEPT 23: Due to road closures in Southwest Middlesex there are some school purpose vehicles cancelled for the day. Cancelled routes are be posted at https://t.co/popqBy63NY #tvdsb #ldcsb @TVDSB @LDCSB pic.twitter.com/RUYppMwjZN