LONDON, ONT -- After three decades of servicing vulnerable members of the St. Thomas Ont., community, the doors at Psychiatric Survivors Network of Elgin (PSNE) are closing.

"I'm sorry it's happening, I really am because I enjoyed being there with them," says Patricia Rusk, a member of PSNE's board of directors.

The peer-to-peer lived experience support group recently celebrated its 30 year anniversary. They've helped those with addictions, homelessness and those in crisis but the drop-in centre will be shutting down due to a lack of funding from South West LHIN according to Rusk.

They will try to take appointments by phone or social media.

"Because we've lost our funding we can't help them anymore, except for just going out to meet them on the street," says Rusk.

Over the past decade, the city has seen more and more support groups offering similar services to PSNE.

There is the daytime drop-in centre at 423 Talbot St., the Inn out of the Cold, CMHA, the Nameless and also the MOS team of St. Thomas police officers.

"At some point somebody has to make a decision which of these groups that are somewhat similar do we fund," says Joe Preston, mayor of St. Thomas.

"CMHA takes a lead role in most of the Mental Health things and I know that they're starting to reach out towards peer support also."

Preston is also looking forward to the network involved in the new supportive housing coming to the city later this year.

"As we add the new full time shelter, at 10 Princess Ave. all of those services combined on one site was going to happen regardless of who else in town was also doing it," says Preston. 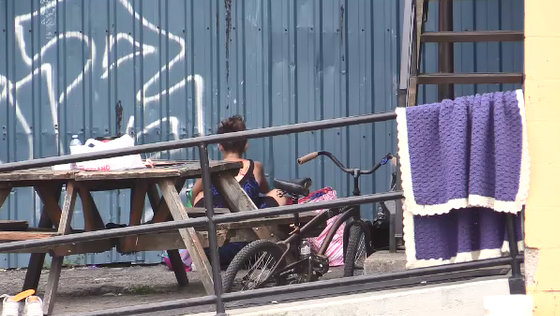 Preston congratulated PSNE on 30 years of being on the street, but says many other organizations can fill in what they were doing.

Businesses in the area of Talbot St. and Ross St. have been dealing with headaches that come along with the clients of the drop in centre for a few years.

"We've had break-ins, we've had copper stolen from HVAC, people peeing and defecating around businesses, cat calling and some other things that make people feel insecure," Sandy Vasquez of CTP Computers told us in 2019.

The owner of the Art Crypt Tattoo and Piercing told us Saturday PSNE's drop-in centre has been a problem for quite some time.

"It was constant needles, bonfires, camp outs and overdoes in the back parking lot, which is not ideal to have directly in the center of downtown and right beside a high school," says Billy Janes, Art Crypt's owner.

"So we'd like to believe that with the closure it is better for the downtown. However, It's not necessarily the "PSNE" as a service that has caused us problems but some of the people that would attend there, and us being neighbours just got the brunt of it. So just because the PSNE is closed I'm not sure it will really mean anything different for us. It will depend on where the people who would attend will go, if anywhere at all".

Rusk believes that despite most clients having good days and bad days, the downtown centre will be missed.

"I don't understand why it's happening because they need us here in town," says Rusk.

"They need someplace where they can go to just drop their stuff for a bit and just sit and relax. Even if it's going to sit in a chair and go to sleep. It gives them a safe place to be but now I guess they'll be out on the streets".