A young dog who stole the hearts of many after she was found abandoned and injured outside the London Humane Society (LHS) is still recovering two weeks later.

For staff at the humane society it's a heartwarming sight - little Gracie running around and playing.

When she arrived at the shelter on March 14 - found tied to a fence outside the shelter - she was barely able to stand.

Judy Foster, executive director of the LHS, says "The wounds are healing and her disposition is amazing."

Foster was the one who found Gracie - cold and emaciated with open wounds on her belly, neck, shoulder and nose.

Staff believe she was abused and may be one of the worst cases they've seen.

Now, Gracie is doing so well that in just over two weeks she has gained 6.5 pounds and is on her way to a full recovery.

"We are so pleased she hasn't been scarred from this whole experience to be afraid of humans, because so often when animals are abused they are scared, they're wary, they're skittish," Foster says.

Staff who have worked closely with Gracie on her recovery say she is one of a kind.

Irene Dakin with the LHS says "Whoever gets her will be very lucky, she has overcome this with incredible leaps and bounds. She is such a personable dog - she's amazing."

Staff hope she will be ready for adpotion in about three weeks, once she has fully recovered.

Meanwhile they are thanking the public for their donations toward Gracie's care.

"We've had a few folks that have stepped up and make larger than average donations...and those donations make a huge difference to help offset our costs here, and so we can be here for the next animal that needs us in this sort of situation."

However, they are still asking for the public's help in their search for informaiton about where Gracie came from as they still have no leads. 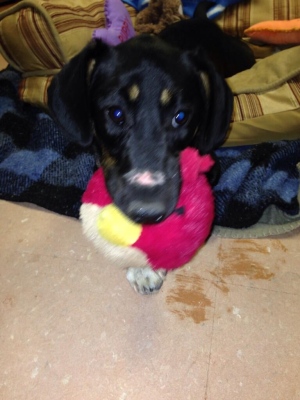 Checking in on Gracie the Dog's Recovery