A road to the past found under Elgin County, Ont. village

You've heard of corduroy pants - and of course there's the bear - but what about a corduroy road? Early settlers used large logs laid along side each other to form a simple, if rough, road.

The Elgin County tourist village of Sparta is already well known for its historic buildings, but until the past few weeks, no one knew what lay just beneath the main road.

It was Robert J. Burns, a PhD historian who retired to Sparta, who noticed what was being unearthed.

Burns said his wife was looking out the window one day, when she suddenly said, “They’re digging up logs!”

To most that wouldn’t be an alarming statement, but upon taking a closer look, Burns said he knew right away what he was looking at.

"In the early days, around the time of the War of 1812 and to the 1840s, the best way to build a road through swamps and other areas, was to lay logs perpendicular to the direction of the road and then to fill in between the logs with sand," Burns says.

"It gave a really bone-jarring ride, but it was better than being up to your axle in mud.” 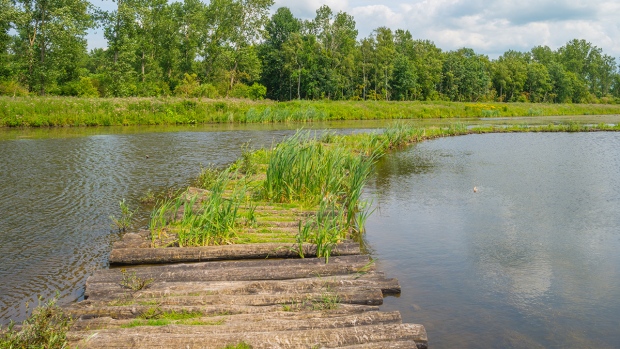 An example of a corduroy road on a lake is seen in this stock image.

The discovery, construction workers on the job told CTV News, isn’t unusual for northern Ontario, but it’s a rare find in the south.

Burns says the road found under Sparta is actually a late example of the technique.

“This particular section of corduroy road, because it’s covered in creosote, had to be later in the 19th century," he said. "But it is technology that goes back into the earliest times of Upper Canada.”

Unfortunately, much of what had been laid has already been taking up by the road crews.

However, Burns said Central Elgin Mayor Sally Martyn has helped to ensure what was left is preserved in a unique way.

“When the construction is finished those logs are going to be taken to the back of the Church Museum here in Sparta and then be constructed as a section of road. It’s so people can come and see what travel looked like in the late 19th century.”

With the reality of COVID-19, however, there is no timeline yet for when that will happen.