Teenagers Tanner Ducharme and Dylan Wilkins were the first to test out the ice at London's newest community ice rink.

The two were invited to East Lions Park Saturday by Ward Two Councillor Shawn Lewis as a trial run to see if it was stable.

"We are probably a day away," says Lewis, who is coordinating the maintenance of the rink.

"We're doing a little test run today after a big flood last night by the London Fire Department.  We got a couple of rough spots and a couple of spots where we need to do a little repair work before we can open it up.  I'm hoping tomorrow we can take down the caution tape and we can be open for people in the neighbourhood to come by and skate.”

The rink is built on the basketball court, which was designed with higher edges be to converted for hockey in the winter.  Lewis calls this space, "hugely important for the east end.”

"This is the only outdoor rink we have in the Argyle area, so I know it's going to get tons of use,” he says. “People will be practicing skating, learning to skate, or playing shinny. We've even got a neighbour who's bringing in a new today to donate for use here.”

"The janitor set up a nice pond there, but we'll be here more often," says Wilkins.

He feels it will be a great place to make new friends while bringing families, friends and people from the area together.

"Hockey is Canada's game and having this in the neighbourhood is going to be sweet,” says Ducharme.

When the rink opens it will be the 17th community ice rink in London, Ont.  That is a new record for a single year in the city.

"I've already had a call today actually of someone saying they've heard about them and they want to do next year," says Karen Oldham manager of community development and support for the City of London. 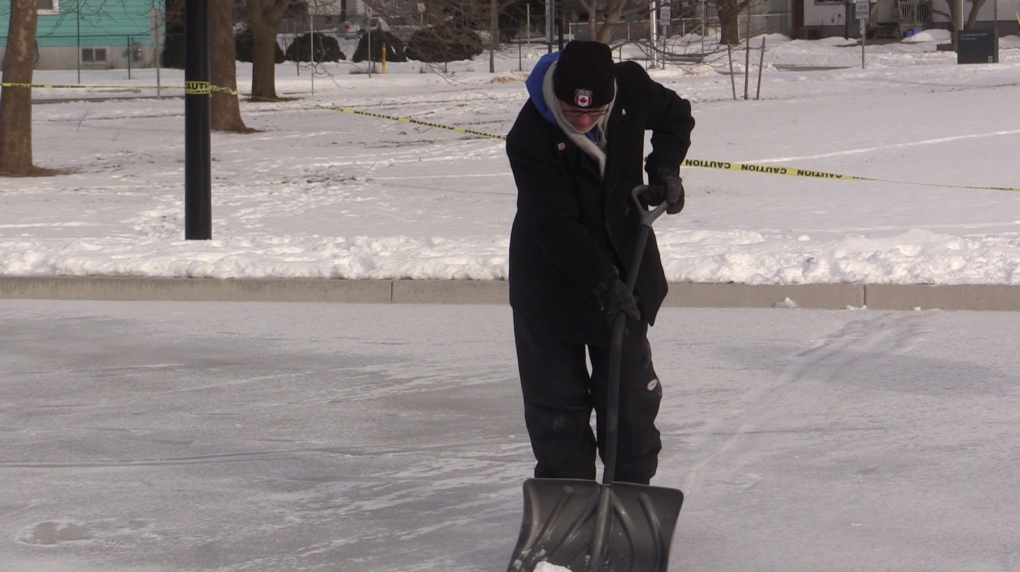 "We have a manual that people get and we pay close attention to the area they're putting it. We make sure volunteers are trained and that they're doing checks every day around the safety of the ice so they close it when they need to. So it's well supported by city staff, but it is definitely a lot of work for volunteers in a neighbourhood.”

Lewis has 12 volunteers lined up for the maintenance of the rink at East Lions.

"The city will provide the tools, the hoses, the shovels," says Lewis.

"We'll even make sure that the water is compensated if it's being pumped from a home or we'll make sure it gets a preliminary fill and then it's up to the volunteers to maintain it.”

That maintenance includes shovelling when it snows, doing an occasional flooding of the ice, and daily checks to make sure there are no cracks. He also wants to ensure that no garbage is being left at the location.

"Other than that it's us at your own risk and it's us being respectful of each other," says Lewis.

"The signs have the guidelines for use posted on them and we haven't had any problems so far. I think it's just because the communities respect the fact that they've got this space they really enjoying it.”

The city also hopes the more safely-maintained community spaces they have, it will help keep people off the potentially dangerous stormwater ponds in the region.

"Stormwater ponds fluctuate in the level, it doesn't matter the time of year," says Oldham.

"Potentially water could start to filter into that pond so they are deemed dangerous, and they're not something that the city endorses people skating on. So the more neighbourhood rings we have, I hope the less of that we're going to see around the city.”

Lewis is looking forward to January 31, when the province will permit East Lions Community Centre to re-open its doors.

"It'll make it a little easier to store the ice rink equipment," says Lewis, who lives across the street from the facility.

"I won't have to lug it back and forth from my house, which is where I'm storing it for the volunteers right now. We're really, really happy with how this facility is starting out both indoors and outdoors.”

Lewis is excited to look across the road and see people from his community using the rink. He'll even be lacing up the blades himself.

"It's going to be a fun couple of weeks," he says. 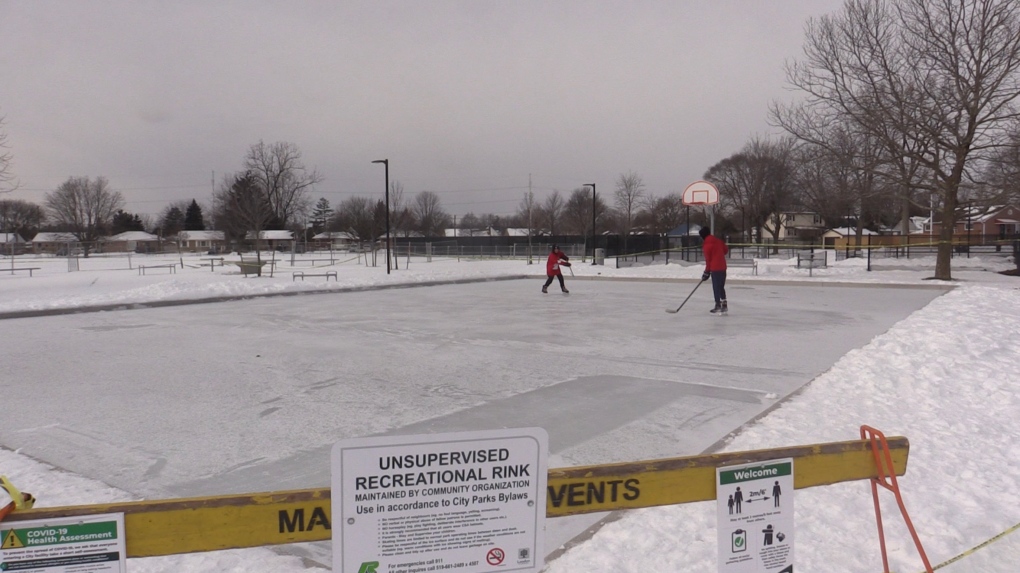 Dylan Wilkins (L) and Tanner Ducharme pass the puck at the new community ice rink at East Lions Park in London, Ont. The teenagers were testing the ice as part of a trial run on Saturday Jan 22, 2022, a day ahead of its scheduled opening. (Brent Lale/CTV London)

As Russia retreats from Kharkiv, music returns in secret concert

In Kharkiv, Ukraine, you can still hear the sound of explosions, but now it's outgoing, with the Ukrainians firing at the Russians in retreat. Russia started withdrawing its forces from around Ukraine's second-largest city earlier this week after near constant bombardment.

The white 18-year-old who shot and killed 10 people at a Buffalo supermarket had researched the local demographics and drove to the area a day in advance to conduct reconnaissance with the intent of killing as many Black people as possible, officials said Sunday.

A man opened fire during a lunch reception at a Southern California church on Sunday before being stopped and hog-tied by parishioners in what a sheriff's official called an act of 'exceptional heroism and bravery.'

Not long before Russian President Vladimir Putin launched his invasion of Ukraine in February, CTV News' Chief International Correspondent Paul Workman returned to Afghanistan, a country he last visited in 2008 that is now faced with a humanitarian crisis under Taliban rule.

While the Red River is starting to recede in southern Manitoba, flood waters linger in communities and more than 2,000 people are still displaced.

Inquest to begin in N.B. police shooting of Indigenous woman during wellness check

The lawyer for the family of a British Columbia Indigenous woman fatally shot by police in Edmundston, N.B., during a wellness check two years ago said a coroner's inquest opening Monday offers a chance for her loved ones to get long-awaited answers.