A loaded weapon, cash and drugs found after a traffic violation observed, Friday 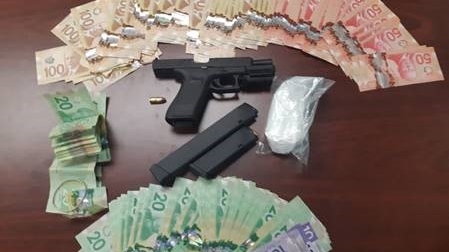 LONDON, ONT. -- A traffic violation resulted in a seizure of a stolen loaded weapon, drugs and over $10,000 in cash Friday evening.

The 24-year-old driver of Toronto, who was allegedly driving while disqualified, along with a 27-year-old passenger of Toronto were stopped on Indian Road in Sarnia.

Upon a search of the vehicle, a loaded Glock semi-automatic hand gun within reach of the driver and passenger.

The weapon had been reported stolen from a break and enter in York Region.

The driver has been charged with:

The driver and the passenger have both been charged with:

Both suspects remain in custody upon further court appearances later in the week.