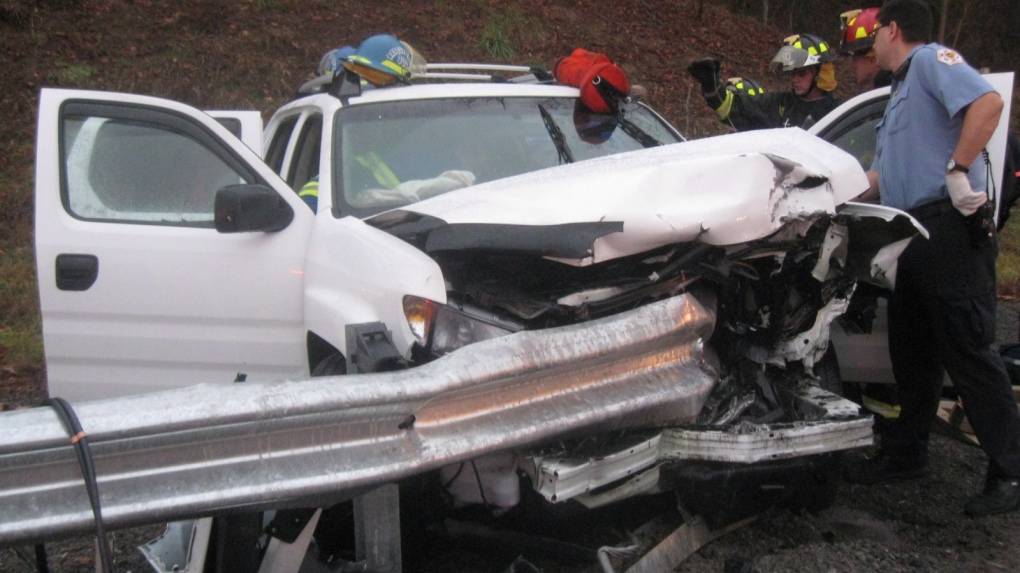 Firefighters and rescue personnel attend the scene of a car accident in Bristol, Tenn., on Dec. 17, 2008. Authorities across Canada are awaiting test results from the U.S. before deciding what to do about thousands of safety devices with alleged defects that they say could cause guardrails to rip through cars and motorists instead of protecting them in crashes. (Handout / Joshua Harmon / Failingheads.com)

A proposed Canadian class action that alleged secret cost-saving design changes made to a highway safety guardrail had in fact turned the barrier into a potentially lethal spear has been settled, court documents show.

This week's settlement of the $500-million action filed by the city of Stratford, in February 2015 will see Trinity Industries pay $400,000 -- without any admission it did anything wrong.

"Neither this agreement nor anything in it shall be interpreted as a concession or admission of wrongdoing or liability by (Trinity)," the settlement agreement states. "In fact, the defendants continue to vigorously dispute and contest the allegations made in the action."

About $131,000 of the settlement money will go to the Canadian National Institute for the Blind, $15,000 will go to the city as an honorarium, and the rest will cover disbursements incurred by its law firm, McKenzie Lake Lawyers.

The money being paid to the institute for the blind will be earmarked for enhanced road safety nationally by allowing the organization to offer municipalities funding to install audible pedestrian signals in places where they otherwise might not have been.

The proposed class action related to Trinity's guardrail end unit, ET-Plus, a system installed on highways across the U.S. and Canada. The unit is supposed to absorb impact and guide the rail so a crashing vehicle doesn't slam into the rigid steel end, but lawyer Matt Baer alleged on behalf of Stratford that those changes had in fact made the barriers dangerous.

The Stratford settlement approved by Ontario Superior Court Ian Leach on Thursday follows an American Appeal Court ruling in favour of Dallas-based Trinity last September. The U.S. court said it had found no evidence Trinity had made secret cost-saving design changes to the ET Plus.

In that ruling, the U.S. Appeal Court in New Orleans overturned a US$663-million judgment against Trinity that a Texas jury had awarded to Joshua Harman, a self-styled whistleblower and failed Trinity competitor.

The original jury finding in his favour prompted dozens of states and some provinces to stop installing the ET Plus. It also prompted American highway authorities to order new tests, which found no issues with the rails.

In a strongly worded decision, the U.S. court found the jury's liability finding could not stand because the American government, aware for years of Harman's allegations, had nevertheless rejected them and had continued to pay for installation of the guardrails.

A notice by Stratford on Friday announcing the settlement references the U.S. court ruling.

"A recent decision of the United States Fifth Circuit Court of Appeals noted that the Federal Highway Administration has consistently reaffirmed the ET-Plus end terminal system meets all applicable safety performance standards and has maintained an 'unbroken chain' of governmental approval from 2005 to the present," the notice states.

Dozens of U.S. states and several Canadian provinces stopped installing the units amid the various legal actions after Harman blamed at least 200 deaths and injuries in the U.S. on the ET Plus. American highway authorities subsequently ordered rigorous retesting of the units and found no defects.

Trinity had consistently maintained its products behaved as intended and approved, and that various lawsuits related to ET Plus were without any merit.