An 18-year-old female pedestrian is in critical condition after being struck by a vehicle on Western University’s campus late Wednesday evening.

Police are describing the woman's injuries as “severe" and "life-threatening.”

The driver, 24-year-old Jared DeJong of London, was arrested at the scene and appeared in a London court Thursday.

He was remanded in custody pending his next court appearance on Nov. 3.

His attorney, Gord Cudmore, says the main concern for his client and his family right now is the welfare of the young woman involved.

Many students on the Western University are struggling to come to terms with the incident, the second fatal crash on campus this year.

The University Students' Council of Western is expressing sadness and hopes for a good recovery, and is also offering help for those that needed.

In a Facebook post, the organization said, "Any community member who feels the need to connect with a support staff during this time is encouraged to reach out to the counselling offices at Western’s Student Development Centre (519-661-3031) or, if living in residence, email needtotalk@uwo.ca."

And amid reports that alcohol may have been involved, students say that everyone on campus takes the issue of drinking and driving very seriously.

Student Theo Bogdan says, "I know, me personally, the people I surround myself with, a lot of them, they feel very strongly about not drinking and driving. But, clearly, if there's still accidents happening there has to be [something] done for there to be more regulation of it."

With so many cars and pedestrians on campus there have been discussions about banning vehicles, but officials say it's simply not practical.

John Carson, director of policing at Western, says, "Campus has in excess of 40,000 people visit here every day, to work and as students, and we need the London transit and the public system to provide transportation to that many people that come to this site. So, quite frankly, it would be very impractical to not have public access to the grounds." 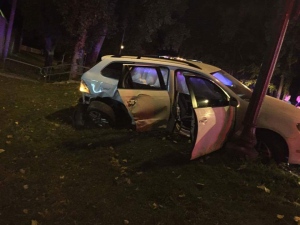