A lightning strike is believed to have caused an oil storage tank to explode in a field in rural Lambton County. Now cleanup is underway after more than 150 barrels of crude spilled into area fields and ditches.

Neighbour Trish Japp and her family live across the street from the site. They were watching a heavy thunderstorm pass through when they saw the flash and heard the boom.

She said there was no accompanying fire, and she believes that’s because it was raining so hard.

Investigators confirm there was no fire -- just smoke and vapour.

Clive Hubbard, from the Office of the Ontario Fire Marshal, tells CTV News London they strongly suspect a lightning strike to be the cause of the blast.

“There’s obviously been an overpressure event inside of that tank. The pressure has increased higher than the capacity of the tank to contain it, and that’s what caused it to be displaced outward from where it was seated.” 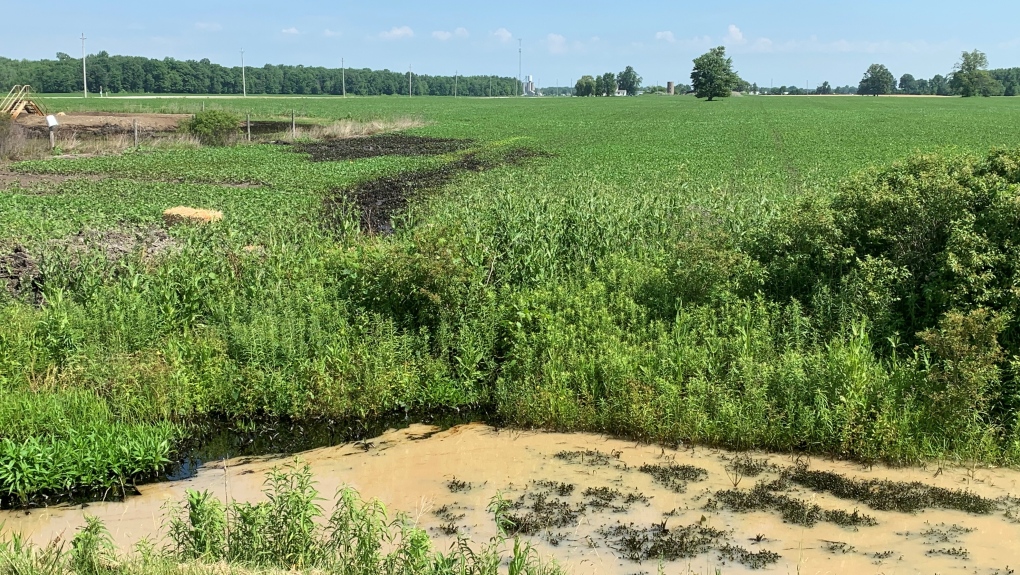 The site is surrounded by ditches and abutted by fields. Black crude has spilled throughout the fields, and appears to be floating in the ditches on top of the water.

St. Clair Fire Chief Walt Anderson said they were able to stop the oil before it ran to a creek.

“The tank went one way, the oil went another, and with the heavy rain it got washed down the drainage, and the farm fields, into the ditches. So we brought in sand, dammed up the ditches, and now we’re into a big cleanup.”

The blast appears to have thrown the oil storage tank about 150 feet from the berm it was resting on. Firefighters had a drone in the air Tuesday to determine how wide the debris field is.

Investigators estimate debris to have been carried as much as 300 feet.

Officials from both the Environment and Natural Resources ministries were onsite Tuesday to sign-off on the cleanup plan.

“So the water is, oddly enough, our friend here. It keeps it from polluting too much, so we just bring the truck along, clean it up, excavate the banks and it’s good as new.”